“A lake full of ketchup” – By Mehul Gohil a.k.a Gorilla

Before this one, there had been no other chess movie I had seen that properly depicted the sport. Pawn Sacrifice, a take on the Fischer-Spassky match was horrible. Searching for Bobby Fischer was ok but nothing special. The old Luzhin Defence was bizzare…that’s not what chess is like.

But Queen of Katwe was tremendous. It got the chess right. The competitive chesser will be hooked to this one. I could see myself as one of the chessers in this movie. It all felt so real and brought back memories of my junior years.

I think what the director, Mira Nair, did that other chess movie directors didn’t was bringing the camera real close to the characters. They like crowd the screen space. This way, as the audience, you see the chess as if you are inside the movie. I think this may be the secret to portraying the game on the big screen.

The people looked real…like nobody put on make up. No combing of the hair. No ironing the pants. No OMO with powerfoam.

They got a real chess expert to advise on the chess stuff. That much was very very clear. The Director took the chess things very seriously.

Phiona takes off her slippers. The whole screen is her feet and ankles. Her shredded toe nails. The dust coating the feet. Then she walks in, one Christine Namaganda stretches out her hand, Phiona shakes it…all the facial close ups are so real. This is how it is in a tournament!

What this movie got right chesswise:

1. Focusing on the feet. The stereotype is: the emotions of a player are shown on the face. Yes, but that is only half the story. When you go spectate a real chess tournament, don’t forget to look at the feet below the table! It is a most interesting sight. The nervousness in those many many pairs of legs! It all looks like a nest of caterpillars hiding and squirming under the tables! It was great to see this was picked up in the movie!!

2. The emotional roller coaster after a win or loss. Something non-chessers fail to realise is the body-blow a players suffers after a loss, and the ridiculous euphoria there is after a win. Especially in a high-pressure tournament. And this happens day after day, round after round. The crying and the shattering dislocation experienced after a loss, the jumping up and down after a win, as seen in Queen of Katwe…none of that is melodrama as per a script formula. That is how it is!!! And it is correct the movie showed this happening repeatedly. Because that is how a player hardens himself/herself. But even grown men like me can be reduced to tears after a loss. It feels bad. You do feel it’s time to give up chess. This movie captures this.

3. The basic but spectacular manoeuvers taught during a player’s formative years. Two were highlighted: a) the pawn breakthrough in the endgame, when two pawn fronts clash, to create a touchdown passer b) the Philidor Legacy. It was nice to see them both in a movie! Nicely done as well! It was nostalgic to watch. It was like being back in training long time ago as a primary school kid. We were a group of seven who went to watch Queen of Katwe, out of which three of us were competitive players. When the scenes depicting the Philidor Legacy etc came up, all three of us stretched our hands out and tried to make the moves with our fingers, tracing on the image of the board on the big screen…this was purely instinctive!

4. The Kenya vs Uganda rivalry. It was rather interesting and amusing to see the Kenya vs Uganda thing when Phiona and Team go to Sudan. It was so eerily real. The yuppieness of the Kenyan contingent…haha…it is still like that…we like to lecture the Ugandans and tell them stories about xyz exotic places but they always end up beating us over the board!

5. The chess books and addiction to reading them. It was a nice touch here…Phiona reading Kasparov’s “Test of Time” (and a vintage copy too as seen in the movie) and “My Great Predecessors” (volume one…Steinitz’s beard and Lasker’s moustache on the cover). It felt pretty cool to see those in a movie! The scene where Phiona is burning the midnight paraffin to read “Test of Time”…that’s a familiar thing to the chess addict. You can’t stop! Nice to see that captured.

I could go on. In general, the movie got the chess right.

I am going to go see this one again. Here finally is a movie made for competitive chessers!

Below is photo of myself posing with three players from the Uganda ladies team just before the start of Rd 1 of the 2012 Istanbul Olympiad. Left to right: Graciellah Kigeni Wads, Goretti Angolikin, Gorilla and Phiona. In the movie, Phiona’s failed attempt to secure the master title at the 2010 Khanty-Mansisysk Olympiad is shown. But they don’t show how she did end up getting it finally in the very next Olympiad in Istanbul. So here we were, in the traditional chaos before the 1st Round of an Olympiad. 1800 players from around the world inside the Istanbul Expo Hall, the best players from 175 countries. The organisers grapling with the opening round bottle-neck at the playing hall check-in point. And so this was the time to catch up with old chess friends from around the world. And for the Kenyans, the Ugandans are our closest chess friends. And so I got to pose with these three ladies…they all hold the master title now. And Phiona here is about to start her journey to overturn the disappointment of 2010. And yes, she wore slippers…I saw them…and the first scene in the movie took me back to this moment.

Queen of Katwe on Wikipedia 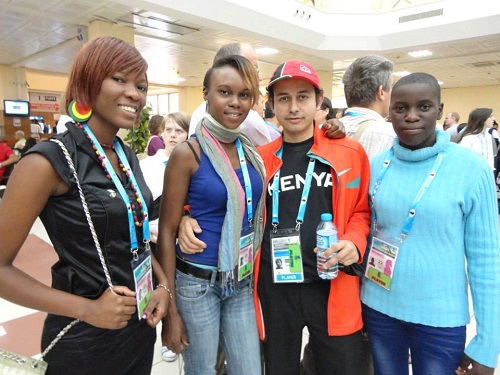