The international law firm Quinn Emanuel will represent the interests of the Russian Chess Federation (the – “RCF”) in connection with publication of the false information about the RCF President Andrey Filatov. The engagement agreement has been signed today.

On May 10, The Telegraph and a number of other media published articles containing false information about activities of the RCF President. The false information referring to the Mossack Fonseca database has been published in the media without proper verification of its accuracy.

“I am grateful to Quinn Emanuel for the prompt response to our request and consider it necessary to establish this legal precedent, – says the RCF President Andrey Filatov. – As subjects of law, mass media are responsible for the accuracy of their publications, and are not entitled to infringe on anyone’s rights or business reputation. The media should act in strict accordance with the law and refrain from informational arbitrariness. Any information that goes to press requires fact checking and a legal sign-off, even that being published in pursuit of the voguish Panamagate sensationalism.”

Quinn Emanuel has begun to examine the matter with a view to taking legal actions against disseminators of the misleading information.

Ed: The Telegraph online article has removed the portion refering to Andrey Filatov (image). In a typical British journalists’ style of exaggeration, The Telegraph branded Mr.Filatov as “oligarch” and “key ally of Vladimir Putin”. 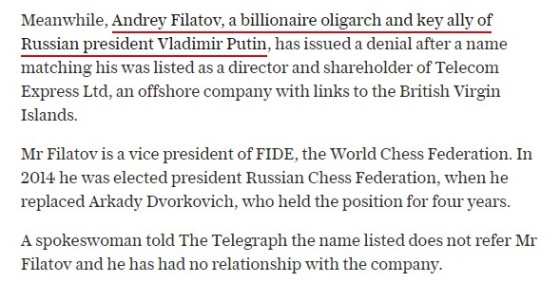 RCF organises the annual nationwide White Castle Children’s Chess Tournament for Schools, the Russian Chess Championship and numerous other chess competitions. The Federation’s Chess in Museums initiative has been running successfully in Russia since 2012.

RCF initiates and implements chess development programmes, including those targeting children, and promotes expansion of the network of chess clubs and sections in the regions. RCF manages individual and team competitions in Russia, organises participation of Russian players in international competitions, promotes Russian chess in the international arena, and develops sporting links with national chess federations, national and international organizations, including FIDE.

Quinn Emanuel Urquhart & Sullivan, LLP is the largest law firm in the world that specializes in litigation and arbitration. Its lawyers have tried or arbitrated more than 2,500 cases in their careers and have won 88 %. The respected legal news outlet Law 360 included Quinn Emanuel into the list of “hugely successful firms that consistently strike fear into the hearts of defense counsel.” Drawing on the interviews with law department heads of 300 companies with an average annual turnover of $14 billion, Quinn Emanuel has been selected as one of the firms with “take-no-prisoners attitude” and “relentless approach to high-stakes litigation and a knack for building legal teams that go for the jugular”. The firm is also distinguished on account of its penchant for suing the largest banks and other financial institutions having earned a reputation of “threat to the banks “.