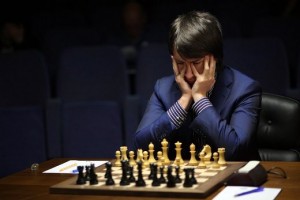 Teimour Radjabov qualified to the Candidates Tournament as the wild card of the organizers, however, the Azerbaijani proved today that it is not a coincidence that he is the Nr. 4 in the world by defeating Ukrainian genius Vassily Ivanchuk with the white pieces.

Radjabov opened with his usual 1.d4 and Ivanchuk chose a Dutch setup in response. This is no surprise given that it is a well known fact that Vassily can play any opening. Radjabov mentioned in the press conference: “Ivanchuk can play any opening line. I prepared normally but couldn’t go into depth”. The game then turned very sharp and the players needed to play precisely to maintain equality. When the Azerbaijani managed to put his knight on g5, black’s position became very critical. Ivanchuk decided to sacrifice his queen to try to solve his difficult position. By this moment, the computer already gave a decisive advantage for white, and Radjabov converted it like a true master. Black resigned on move 34.