Teimour Radjabov and Peter Svidler have scored their first respective victories in the FIDE Grand Prix in Tbilisi.

The remaining four games were drawn. Evgeny Tomashevsky is on top with 4,5 points, followed by five players who are full point behind. 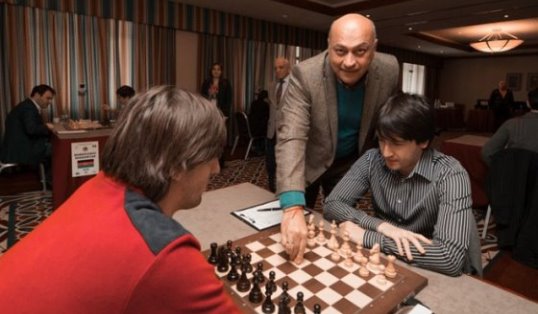 Visit the photo gallery and replay the games. Press conferences will be available in the video gallery. 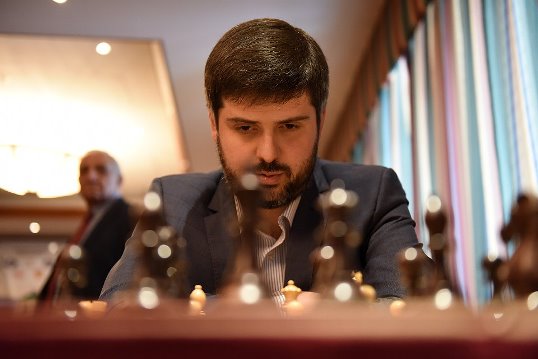 In the Anti-Berlin Ruy Lopez white played a relatively rare 8.Bxc6, which Svidler doubts anybody will repeat soon. 8.h3 was leading to normal theory according to him.

Svidler also pointed that 11.d4 was a mistake and after that white has to be careful in order to equalise. He added that 11.Nf1 was better. On move 19 he was lucky that Ne4 is working.

Andreikin later missed 21…Bxf3 22.Qxf3 Rd8 to be equal. After the game continuation white suddenly got some play. Andreikin admitted that he missed 24…Qd6 would run into 25.Nf5.

The resulting endgame was quite pleasant for white, he won a pawn and continued pressing for a win, while black was in huge time trouble.

Perhaps black could have tried 27…Ra3 28.Rc1 Kf8 “with a long game ahead”. As it happened, white advanced his passed pawn and duly converted the advantage. 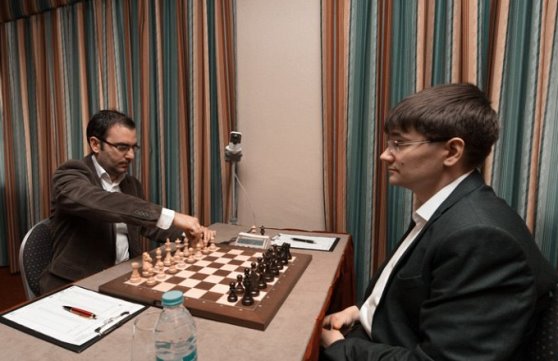 Another Ruy Lopez, only this time Anti-Marshall. After the regular opening sequence, white found a very strong move 17.Bb3 that allowed him to seize initiative.

White was able to win a pawn, but only after a series of exchanges that reduced the material. With 4 vs 3 pawns and queenside cleared, white could not make progress against the black rook and draw was signed on move 38. 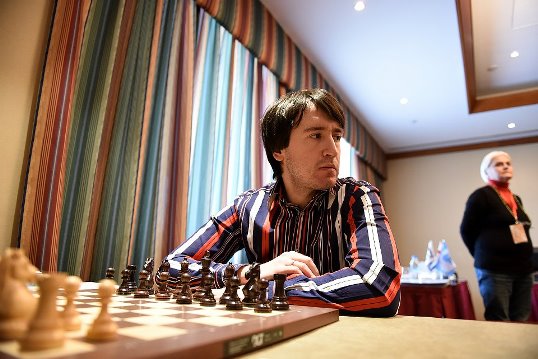 The Sicilian Naidorf Poisoned Pawn is one of the sharpest opening variations in chess. Radjabov played the interesting 13.Bg3, because according to him “the main line 13.exf6 is deeply researched, all the way down to a draw”.

Another mistake followed with 18…Bb4, when 18…Nxg3 19.Nxa2 Nxh1 would have given some chances in unbalanced position. Grischuk missed that after 19…Bxc3 20.Qxc3 Qb1+ white has simple 21.Bd1.

The game was finished in a matter of couple of moves. 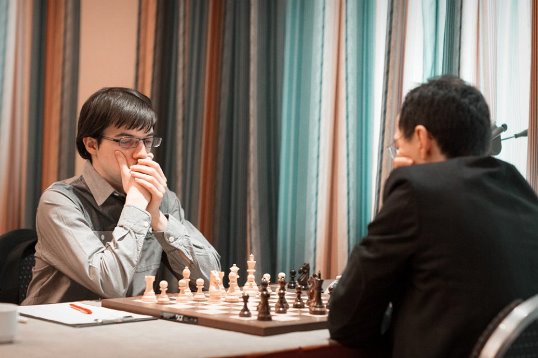 The French player did not expect Petrov’s defence, but nevertheless continued with the most popular line with doubled c-pawns and long castle.

Black gave up the bishops pair in order to establish dominant knight on e5 and also castle long. Kasimdzhanov reminded that he tried short castle against Vishy Anand once and that he “learned the lesson”.

There was some complex maneuvering but the players also run into huge time trouble. After the required 30 moves were made the players have agreed to a draw. 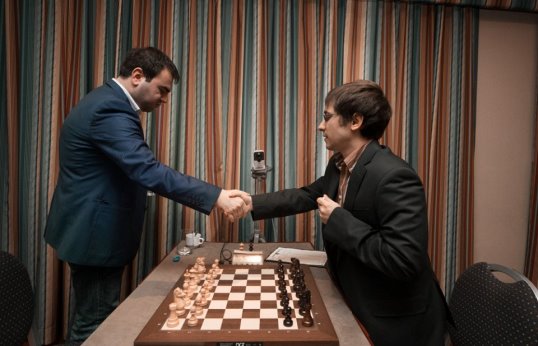 A relatively quiet opening, the Vienna Mieses Variation, led to normal pieces development of both sides and equal play.

After the continuation 15.a4 f5 massive exchanges followed and each side was left with a rook, bishop and handful of pawns.

Mamedyarov admitted that after 26.Bxb7 he had considered the winning possibilities for either player were gone. He just wanted to complete next few moves to follow the 30-move rule and offer a draw. “In the end, I was even a pawn up, how difficult can it be to make a draw”, he said.

But then he made several mistakes and all of a sudden black was playing for a win.

Despite the equal material in the rook ending white position was very unpleasant due to weak pawns.

Jakovenko was pressing for a long time but in the end he could not convert the advantage and the point was split on move 76. 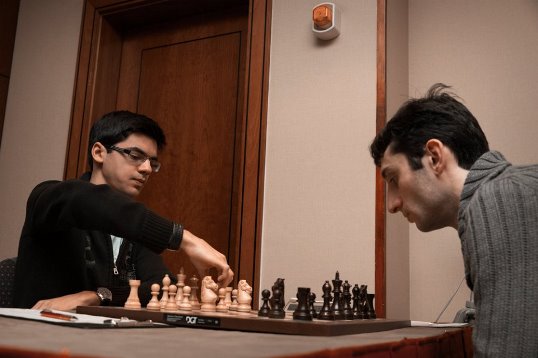 In the opening which was a hybrid of Slav and Gruenfeld Indian black conceded a pair of bishops in order to solidify the center.

White however responded with the strong 12.Qa4. The queens went off, but white emerged slightly better from the opening, both players agreed.

White prepared the central push e3-e4, but he underestimated the strength of the black bishop on e3. 27…f6 was a strong move which prevented white from blocking the center.

Jobava said that his plan was to play 31…f5 in order to prevent Ne4, but then he just changed his mind and allowed the jump.

This caused some coordination problems for black because white held two bishops and the game was opening up.

Black did hold well and was finally awarded with a draw after six hours of play.