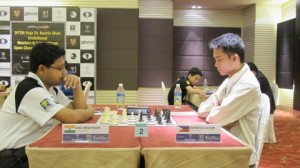 In every tournament one needs a bit of luck and International Master Oliver Barbosa and Jahongir Vakhidov probably got more than their fair slice of luck to record back to back wins against International Masters Arghyadip Das and Richard Bitoon respectively in Round 2 on the first day of play in the DYTM Raja Dr. Nazrin Shah Invitational Masters & International Open Championships being held from 4-10 September at the Swiss Garden Hotel & Residences Kuala Lumpur.

Until then, all the four players had won their morning opening games for a perfect start and were aggressively looking to build on their early advantage.

It had been a good, maybe even a great day in the office in the first round for the top two rated bets from the Philippines, and clearly the exact opposite for their colleagues from Singapore as with relentless play Barbosa and Bitoon slowly ground down their opponents, fellow Grandmaster hopeful International Master Goh Wei Ming and Grandmaster Wong Meng Kong respectively to take home their first points.

Uzbekistan’s young upset Jahongir Vakhidov and India’s Arghyadip Das were also happy with their first round wins over Vietnamese Grandmaster Nguyen Anh Dung and Malaysia’s Mas Hafizulhelmi while International Master Nguyen Van Huy was unable to make headway against veteran Grandmaster Tahir Vakhidov and so they ended up splitting the point early.

But after just two rounds it there are still seven rounds more to go and so there is still all to play for and Nguyen Van Huy and Tahir Vakhidov has increased their tally to 1.5 points to sit just half a point behind the leaders while Goh has bounced back well by beating a woefully out of form Nguyen Anh Dung, who together with Wong and Mas has yet to get onto the scoreboard.

International Open standings after round 2