SAINT LOUIS (May10, 2013) — A pair of largely uneventful draws by the two leaders protected their respective leads, but a host of other players jockeyed for position just beneath them in round six of the 2013 U.S. Championship and U.S. Women’s Championship. Many crucial games were decided into the sixth hour of play.

The marquee matchup so far of the men’s tournament, GM Gata Kamsky and GM Alex Onischuk, played a relatively short two-hour draw on the top board. The split point allowed three-time champion Kamsky (5/6) to retain his half-point lead over Onischuk (4.5/6), who is seeking his first title since 2006. “The result is okay,” Onischuk said. “Gata was better prepared. He knew this line better than I did. I didn’t expect …f5. I was out of my book.” Kamsky played the first dozen moves in negative time thanks to the increment.

“I think it’s still not over,” Onischuk said about the chances to finish atop the standings. “One game can change everything.”

Since no one won, GM Alejandro Ramirez’s win over GM Joel Benjamin makes him joint second with Onischuk. After a poor 2012 Championship in which he scored only 4/11, Ramirez now has surpassed that mark in only six games. Benjamin’s unlikely run for his first title in more than a dozen years took a major setback when he missed the clever 62…h5+ in severe time pressure. Instead, if the king is less brave and walks backward, white has some chances to hold. “We were really tired by that point,” Ramirez said. “It still looks really bad for white.” Ramirez had about four minutes while Benjamin was under one minute. “I haven’t played on increment yet in this tournament, and I think it has really helped my chess.”

“If somebody told me before this tournament, ‘You’re going to win four games,’ I would have told them, ‘You’re joking,’” Ramirez said.

Boards 3-5 all contained their own interesting story lines as well. FM John Bryant held second-seeded GM Timur Gareev to a solid draw, prompting another grandmaster to comment, “I guess the U.S. Open wasn’t a fluke.” Bryant won the 2013 automatic qualification from the 2012 event. “I had a good position out of the opening,” Bryant said. “I let him trade his dark-squared bishop. That might have been where I let the advantage slip away.” Opponents are starting to appreciate Bryant’s talent.”He told me one day I could be like him, if I’m lucky,”  Bryant said Gareev told him after the game. 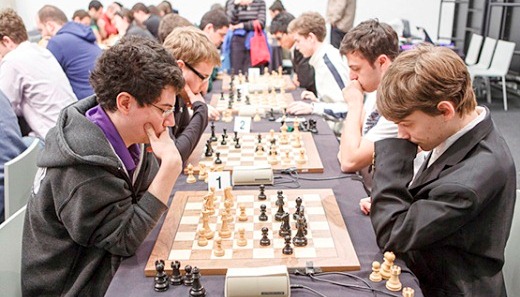 Like Benjamin, another tournament veteran faltered in round six. GM Larry Christiansen, who combined with Benjamin has more than 50 U.S. Championship appearances, stated previously that he worried about his energy in the later rounds. Christiansen lost his second game in a row, though GM Conrad Holt admitted that he benefited from some good fortune.

“I was afraid I was doing very badly, but then I liked my position,” Holt said. “I wasn’t calculating that well and missing all of his ideas, but I was lucky and kept having a resource. I didn’t see Ra7, but he didn’t see Bc5, so it worked perfectly.” The paradoxical 44th move both attacks the rook on a7 and gives the black king a necessary flight square to threaten 45…Rg4+. Holt said he does not expect to keep getting by this way. “I’m sure I’ll continue to make lots of blunders going forward.”

On board five, one lengthy streak ended, while another one continued. After drawing 13 consecutive games dating back to last year, GM Shulman finally cracked today against GM Ray Robson, who has now won three straight.  After barely scraping by with a draw in round five, Shulman was behind very early in round six. The computer showed a whopping +2 for Robson after only nine moves, easily the biggest opening advantage any player has had in the event. His king meekly moved to f8 shortly thereafter. With both competitors playing almost exclusively on the 30-second increment, Shulman defended tenaciously before falling prey to a defenseless pin. After being hoodwinked, Shulman shook his head and let his time run out. 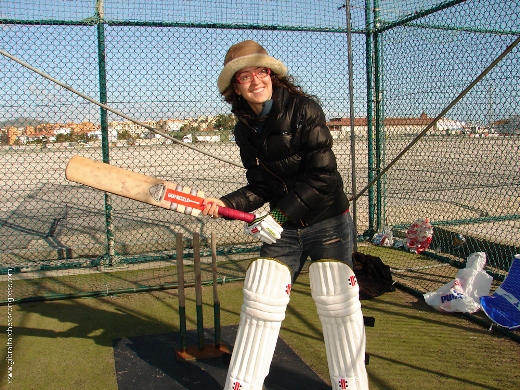 In the women’s championship, Irina Krush equalized as black without issue, though she insisted she still preferred to make a more dynamic game. She chastised her decision not to play 9…Qg5 to take advantage of 9. Bd3, which weakened g2.

WGM Tatev Abrahamyan pounced on the opportunity to close the gap, winning against three-time champion WGM Anjelina Belakovskaia. After being surprised out of the opening, she decided to play the safe Nf3 variation against the Alekhine’s Defense.

“I was not expecting it,” Abrahamyan said of the black’s opening move. “I looked up a lot of lines but not this one. This tournament it seems like [Belakovskaia] is doing specific preparation.” Belakovskaia has not played competitively in several years, making her database of historic games too outdated to matter. After everything developed from the back row for white, black’s rooks were not yet connected, and Abrahamyan won a piece with a simple tactic. Although the game dragged on, it was essentially a miniature. “It seems like it’s coming down to the finish line, so it’s really nerve-racking,” she said.

Still lurking is IM Anna Zatonskih, who won the longest game in either tournament, beating WGM Camilla Baginskaite in a complicated rook and minor piece ending. WFM Sarah Chiang got her first point today, beating WIM Vikorija Ni as black. She said her coach, GM Gregory Kaidanov, who is playing in the U.S. Championship, gave her a useful perspective. “He said when he has a streak of bad games, like if you go 0-9, at the end of the day, your family still loves you. Everything is okay. You have to focus on other things. That really helped me a lot. But it’s still a relief finally winning a game. In the long run, I’m going to play in hundreds of tournaments, and this is just one.”