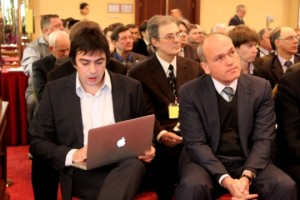 On the International Chess Day and 90th birthday of FIDE, a day before the official deadline set by world chess body to the Organizing Committee of the Olympiad, the Russian Chess Federation have broken the silence with yet another open letter.

This time it goes to Ms Marit Wiig, General Director of the Department of Sport in the Ministry of Culture, Norway.

Mark Gluhovsky comments, “Congratulations everyone on Day of Chess! It is a pity, that on this day I’m not only congratulating you, but also sending an open letter from the President of Russian Chess Federation to the Head of Sport Department in Norway. Everybody knows that the problem of participation of the Russian Women Chess Team is still not solved. In this letter we ask help from Ms Marit Wiig… I can not bear the thought that the Russian women’s team continues to suffer from this illegal decision.”

To: Ms Marit Wiig
General Director of the Department of Sport in the Ministry of Culture, Norway

I am writing to you, the person in charge of Norwegian sport, in the hope of a fair resolution to the problem that has arisen in preparation for the World Chess Olympiad in Tromsø (to be held 1-15 August this year). In the RCF we are well aware of the outstanding sports tradition of Norway and its extensive experience in organizing international tournaments.

Unfortunately, incompetent and illegitimate decisions by the Chess Olympiad organizers are casting a shadow on your country’s image. This is particularly unfortunate today, when Magnus Carlsen has become the world chess champion and chess is starting to gain momentum in Norway.

You will certainly know that the Olympiad Organizing Committee only publicly announced the go-ahead for the tournament on 5th June – less than two months before the start of the tournament. According to the Organizing Committee Director, Mr Hans Olav Karde, the money initially allocated by your Government to hold the Olympiad turned out to be insufficient. Press reports indicated that your Government accommodated the Organisers and allocated an additional tranche. However, instead of speeding up the preparations for the Olympiad, in which more than 150 countries are taking part, the Organizing Committee took decisions which bring no glory to Norwegian sport. The most outrageous decision has been to ban the participation of the Russian women’s team – the winners of the two last chess Olympiads. Throughout the history of the Chess Olympiads, which have been held since 1924, the Organizing Committees have never taken such absurd politically driven decisions.

We could not let this dangerous precedent pass unnoticed. Lawyers from American company Quinn Emanuel have prepared a lawsuit against the Organizing Committee – which is attached to this letter. We hereby inform you, Ms Wiig, that the Russian Chess Federation will demand a public apology from the Organizing Committee that is due to the Russian
women’s team. We are confident of the validity of our legal case and will seek compensation for the costs the RCF incurs in filing its law suit and for the moral damage caused to the Russian women’s team.

Our position has been backed in writing by the World Chess Federation (FIDE), which placed the organization of this prestigious event in the hands of the Organizing Committee. Nevertheless, the final decision has not yet been announced, which worries the RCF.

I would like to apologize for being too emotional in this letter, but chess is an extremely important and popular sport in Russia. Imagine what Norwegian fans would fee like if, for example, Ole Einar Bjørndalen had been banned from the Sochi Winter Olympic Games through the fault of the Organizing Committee.

I appeal to you, Ms Wiig, knowing your dedication to the principle of fair play in sport. I urge you to correct the decision of the Organizing Committee, so that the grandmasters could prepare for their competitions without hindrance and the fans all over the world could enjoy their play.

Yours truly,
Andrey Filatov
President of the Russian Chess Federation