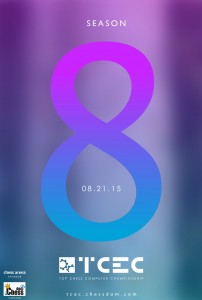 The Top Chess Engine Championship TCEC Season 8 is in progress and eight rounds have already been completed.

The reigning TCEC champion Komodo (3213) is shattering opposition. It has collected 7.0/8 points, leaving the nearest followers, Gull (3118) and Ginkgo (3066), a full point behind. This fact is especially interesting having in mind that Komodo plays this Stage 1a with version 9.1, while in further stages we will see it with the new, stronger and with higher ELO, version 9.2.

Komodo’s play is yet another bid for computer chess to hit mainstream media. The “Chess Dragon” played the longest decisive game so far in TCEC Season 8. Komodo – Fire finished in favor of the current leader after no less than 107 moves. The game can be replayed here

Today Stage 1a of TCEC continues with the battle for top 6, the positions giving qualification spots for the next stage. Fire 5b is hot favorite despite the crash against Gaviota in earlier rounds. The other engines in contention are Arasan, Texel, Protector, and Gaviota.

See the full standings below.

The event begins with the engines divided into two groups – Stage 1a and 1b. Each consists of 12 engines. Each group format is a single round robin. There is no opening book in use here, so the engines are on their own from move 1. The top 6 from each group will move on to Stage 2, while the rest are out of TCEC for the current Season. For Stage 1, the time control is 90 minutes + 30 seconds added per move for the whole game.

See all rules and regulations

The second group of the competition Stage 1b will start after Stage 1a is complete. See all participants here