Probably the most spectacular playing venue for open tournament EVER!

The tournament will be held in Harpa, Reykjavik’s spectacular new music hall on the harbour. Only 5 minutes walk to downtown Reykjavik, Harpa features several restaurants and concerts during evenings and weekends. More information about the playing venue can be found here.

In co-operation with Icelandair, we have arranged special packages, which include flights and hotels. 25% discount of the entrance fee will be provided when package-receipt is shown. More information here. 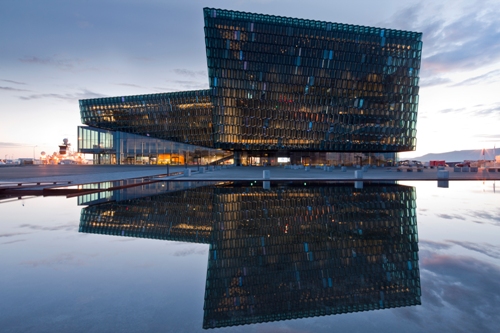 We will offer limited number of conditions, flight and accommodations for GMs and WGMs. Our goal is to answer all requests no later than the beginning of January. Interested players can mail to: reykjavikopen2012@gmail.com but very limited conditions can be offered here after.

An Even Better Playing Venue for the 27th Edition

The 2012 tournament is expected to be very strong. It includes at least 2 players with rating above 2700. Players list bellow. In 2011, 166 players from 30 countries participated, including 27 grandmasters, 11 of which with an ELO rating of 2600 and higher.

Total prizes in 2012 will be €15,000, including many special prizes for various ages and rating categories, in addition to the traditional top women prize.

Join the Legends and Be Part of Chess History

The City of Reykjavík has sponsored the tournament since its inception in 1964, when Mikhail Tal won it with a record 12½ points out of 13. The tournament was initially held every two years, but has since 2008 taken place every year. It was closed in its early years, but has been an open event since the 1980s.

Much More than a Chess Tournament

As in earlier years, several chess-related events will take place at the same time as the tournament, including the now famous the Reykjavík Open Chess Pub Quiz and the Golden Circle sightseeing tour that includes stops at Geysir and Bobby Fischer’s final resting place in the southern part of Iceland.

And given the favourable exchange rate of the Icelandic króna, Iceland is one of the most attractive places in the world to visit and play in chess tournaments.

During the Reykjavik Open in 2012, there will be an exhibition in the National Museum of Iceland commemorating the 40th anniversary of “The Match of the Century” between Bobby Fischer and Boris Spassky. The museum is within a 15-minute walking distance from Harpa. The exhibition will feature, among others, the board and chess sets from the match, and of course much more.

Still Thinking About Your Next Move? This is What Last Year’s Participants Said

Reykjavik City Hall as an Open tournament venue, is probably one of the best venues of any Open tournament in the World. It has its advantages that go beyond regular good playing conditions.

During the game, players can relax watching over frozen small lake, swans and ducks swimming in the hot spots, adults and kids skating on the ice.

After the game, stepping out of the playing hall, either being happy with your win or annoyed/distressed with your blunder, you are in the middle of the renowned Reykjavik night life to be enjoyed.

This year organizer is moving from the City Hall, but is promising at least equally good venue (and is still candid about it).

Reykjavik Open is definitely an experience for itself, an event worth visiting and returning!

“Thanks again for a very enjoyable tournament in Reykjavik. Personally, I’m really glad I got another opportunity to visit Iceland after so many years, and it’s great to see the tournament getting tougher every year!”

“I just wanted to let you know that I enjoyed the tournament. Your group did a great job ! I liked the playing hall, the top board display and the site overlooking the pond.”

“I just wanted to thank you for an excellent event. I really enjoyed it and will definitely enter again next year.”