The Romanian International Open 2016 has just started in Alba Iulia, one of the most beautiful cities of Transylvania, famous for its Vauban citadel Alba Carolina, the largest one from Eastern Europe. There are 34 players at the start from 8 countries, with an average rating of 2352, 11 of them being holders of GM title. The top seed is former Romanian champion, who is representing France now, GM Andrei Istratescu (2602).

The opening ceremony was honored by the presence Ion Dumitrel, president of Alba County Council, Marcel Florea, the manager of Transilvania Hotel which is hosting the event, Gabriel Plesa, the vice-mayor of Alba Iulia Municipality, and many other partners of the event. Romanian Chess Federation was represented by its General Secretary Vladimir Danilov and Tournament Director Marius Ceteras.

After an introduction of the painting exhibition with chess thematic, especially realized by students of Alba Iulia Arts High School for this event, Ana Zaharescu, a highly awarded student of “Horea, Closca and Crisan” College of Alba Iulia, two times gold medalist in Greek Language School International Olympiad, made the first move of the tournament. Other remarkable students of Alba Iulia were invited by the organizers to make the first move in the next rounds too.

There were not big surprises in the inaugural round, but we can notice the 3rd, 4th and 5th top seeds GM Vlad Jianu (ROU), IM Andreas Heimann (GER) and Szabo Gergely (ROU) only drew their games, while 7th top seed Stelios Halkias (GRE) neaded 5 hours and half to outplay the fierce opposition of the Romanian young talent David Gavrilescu (13 years old). 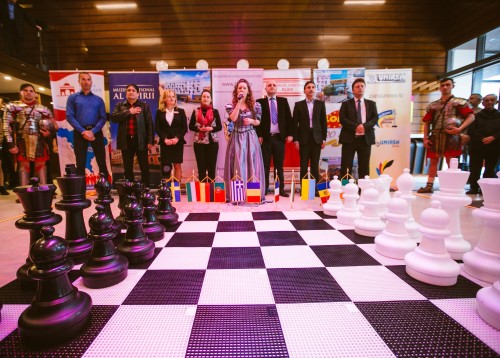