The local Bengal Brigade turned out with thumping performances in the third round of the Rose Valley Open International Chess Tournament, organized by Alekhine Chess Club at Gorky Sadan, Kolkata, India.

Round 3 video by Vijay Kumar

After two lack luster days, Wednesday brought out good news for the local stars as most of the players came out with creditable win. GM Surya Sekhar Ganguly (FIDE rating 2630) had yet another good day. Opening match of a new tournament was always hard when he was held to a draw. Now it seems the tiger from Bengal is back to his winning ways. Today Ganguly took just 35 moves to brush aside Russian GM Alexander Fominyh (2455). 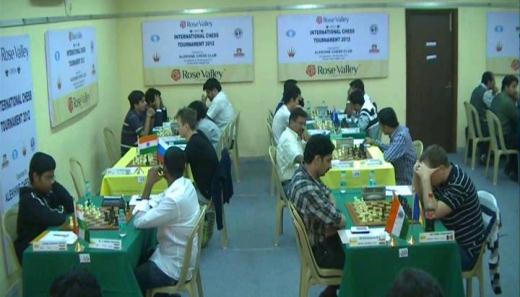 Shardul Gagare continued with his exemplary performance albeit with a little bit of luck. From a lost middle game, the youngster turned the tables on Grandmaster Sahaj Grover.

13-year old Arvindh Chithabaram also did well to hold Indian GM Abhijit Kunte. it showed his mental maturity at this tender age. One can remember that in just concluded Indian Premier Chess tournament held at Khudiram Anushilan Kendra, this boy upset GM Dibyendu Barua in the very first round.

Expectedly, the axe has fallen on all the top seeds. Indian GM Deepan Chakkravarthy held top seed GM Radoslaw Wojtaszek of Poland. Given the huge difference in ratings, Deepan kept surviving a difficult position for a long time and finally gave perpetual check to force matters.

For the second consecutive day IM Aditya Udeshi (2376) remained a headache for the higher rated players. On Day-2 he made Moldavian GM Viorel Iordachescu (2619) to share point with him and in the third round Russian GM Daniil Linchevski failed to break the ice. N Srinath drew with Paragua Mark of Philippines.

The sole leader is Grandmaster Marat Dzhumaev of Uzbekistan. Dzhumaev accounted for Indian IM G A Stany. There is a wolf-pack of 16 players following the leader on 2.5 points each.

Anand – Carlsen game 1 press conference
The first game of the FIDE World Chess Championship Match finished in a draw. Replay the moves with analysis by IM Aman Hambleton and ...