Taking his tally to 5.5 points out of a possible seven the youngster maintained his slender half point lead after a spate of draws on top boards.

Round 7 video by Vijay Kumar

Ten players follow the leader a half point behind. They are Radoslaw Wojtaszek of Poland, Dzhumaev Marat of Uzbekistan, Ahmed Adly of Egypt, Viorel Iordachescu of Moldova, Mikhailo Oleksienko of Ukraine and Indians Deep Sengupta, SP Sethuraman, Vaibhav Suri, IM Swapnil Ghopade, IM Debashis Das share the second position with 5 points each in their kitty. 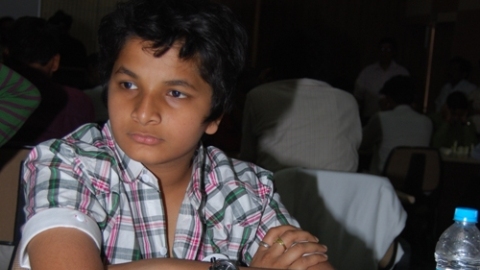 Top seed Radoslaw Wojtaszek was held again as he failed to capitalize a slightly better middle game advantage against Sethuraman. The Indian defended well and earned a creditable draw.

In notable results for aspiring Indians, Debashis Das, and Swapnil Dhopade came close to earning their Grandmaster norms after another day of hard work. While Dhopade played out a draw with erstwhile leader Dzhumaev Marat of Uzbekistan, Das snatched a half point from Ni Hua of China.

Local star Suryasekhar Ganguly had yet another draw with M Shyam Sundar who is also on the verge of becoming a Grandmaster from this tournament. After today’s result, Shyam Sundar is just one point shy of attaining the 2500 ELO rating barrier which takes him to the status of Grandmaster.

GM Sandipan Chanda also had to be content with a half point against S Arun Prasad. Today for the first time in this tournament all players of Bengal Brigade earned points. IM Saptarshi Roy and WGM Mary Ann Gomes scored encouraging victory over Saumil Pandhya and CRG Krishna respectively.

With just four rounds to come, the event is wild open and only the next two rounds might see a decisive turn around for the higher ranked players.

Anton Korobov, the other 2700 club member apart from Wojtaszek, is also within striking distance of the leaders having 4.5 points and giving him company in this score group are star players like Ganguly, Ni Hua, Sandipan Chanda and Italian champion Alberto David.