The main tournament of the 12th International RSSU Cup Moscow Open, a leg of the Russian Cup, ended in a two-way tie between Urii Eliseev (2582, Russia) and Dmitry Gordievsky (2506, Russia). Both scored 7.5 points in 9 rounds. Eliseev had a better tie-break score and was awarded the main prize.

Anton Korobov (2710) got the third prize thanks to having the best tie-break score. 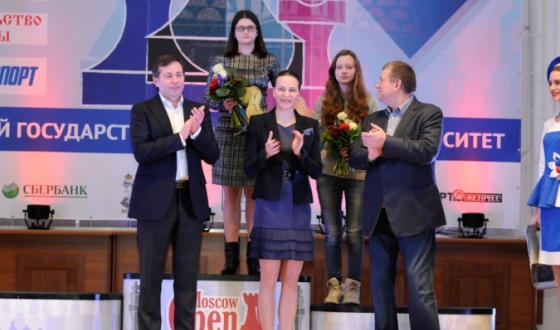 The final tournament of the program of the 12th International RSSU Cup, the 2016 Moscow Open – RSSU Cup in blitz chess gathered 218 participants.

Young grandmaster from Omsk Vladislav Artemiev won the tournament with 8 points from 9 rounds. With the same points were international master from Moscow Vladimir Seliverstov and grandmaster from Ukraine Eldar Gasanov, but according to the additional criteria they won second and third places correspondingly.

The best result among women belongs to Valentina Gunina from Moscow, she scored 6,5 points. Evgeny Dragomaretsky rose above others in the veterans’ event. He finished with 7 points.

At the closing ceremony the winners and runners-up received their prizes from Evgeny Bushmin, RSSU president and deputy chairman of the Federation Council, Natalia Pochinok, president of national student chess league, and Vladimir Palikhata, president of Moscow chess federation.