The traditional match between the national chess teams of Russia and China starts in Moscow. The opening ceremony of the friendship tournament, which was established in 2001, was held on 10 June 2016 at the Botvinnik Central House of Chess (14/1 Gogolevski Boulevard).

Game dates: June 11-15. Games will begin at 3pm Moscow time. The match will be held on 10 boards (5 men and 5 women), according to the Scheveningen system. The team with the most points will be declared the winner. 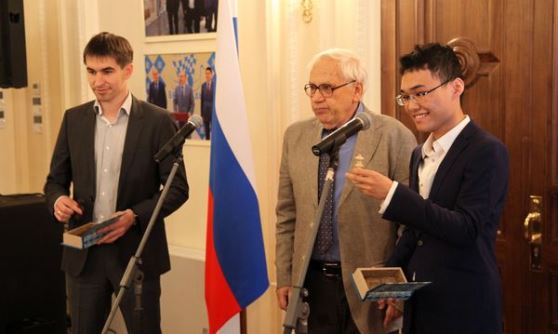 The first friendship match between Russia and China was held in 2001 in Shanghai with the participation of six of the strongest teams of Russia and China (2 men’s, 2 women’s and 2 junior teams). A total of nine tournaments were held between 2001 and 2015, with matches in Shanghai, Moscow, Beijing, Ningbo, Sochi, St. Petersburg and Nizhny Novgorod. While the tournaments were held in accordance with different systems and with different line-ups, at least 50% of all team line-ups were members of the Olympic teams.

In 2015, according to the results of traditional tournaments, the total score was 4:5 in favor of the Chinese team. However, at the suggestion of China, an additional knockout match among men’s teams was held in 2015. Russia’s Sergey Karyakin who played the first board during the match, beat the entire Chinese Olympic team.

“Russia and China attach great importance to the development of chess at the state level and are the countries that set the world chess calendar”, said the President of the Russian Chess Federation Andrey Filatov. “We are glad that the Russian-Chinese relations in the field of chess have been strengthening year after year. White Castle, a chess tournament for school teams, has just finished in Sochi. This year, young Chinese players took part in this renowned competition for the first time and showed a brilliant winner result. The friendship match between the national teams of Russia and China, which starts today, will be another step towards developing our cooperation, and we are very pleased to host the match in Moscow, in the historic walls of the Botvinnik Central House of Chess.”