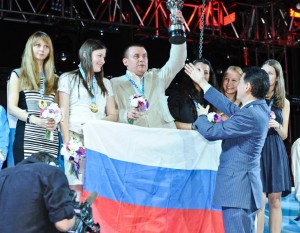 The team of Russia won the gold medal in the women section of the Chess Olympiad in Istanbul. Alexandra Kosteniuk, Nadezhda Kosintsva, Tatiana Kosintseva, Natalia Pogonina, and Valentina Gunina brought the second consecutive Olympic gold for the Russian women team, continuing the reign that started in Khanty Mansiyks.

Russia edged China on tiebreak, as both teams finished on top with 19,0/22. Clear third place was for the team of Ukraine with 18,0/22.

The success of the women Russian team was key for bringing the Gaprindashvili Cup that is awarded to the best country at the Olympiad – sum of the points of men and women team.

To add to the amazing success of the golden Russian women generation, Nadezhda Kosintseva and Natalia Pogonina won individual gold medals on boards 3 and 5. 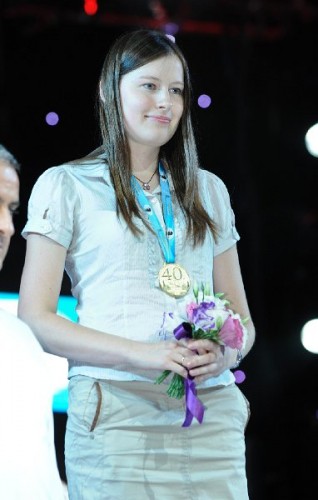 Natalia Pogonina with the gold medal 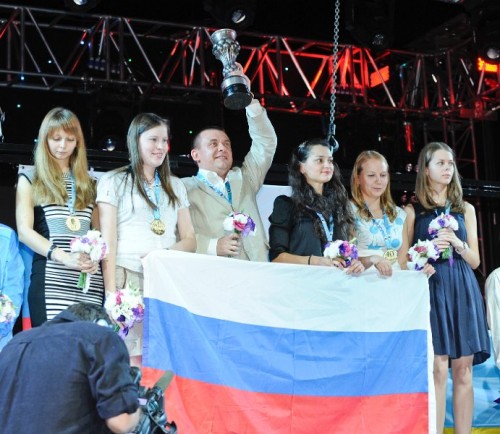 Interview with the gold winners from Russia

Karlovich: Dear ladies and gentlemen, I am extremely happy to congratulate the Russian women team as these ladies won gold medals here, in Istanbul. They have proved that they are the strongest in the world. My first question is, whether you really hoped to make it, guys?

Rublevsky: We did. However to make this true we prepared a special opening variation, tried hard and simply played well to get the result.

Karlovich: What was the most decisive moment in the Olympiad for the Russian team?

Kosteniuk: Perhaps it was the moment that started with a draw against Poland – we felt that there are three draws in a row and we simply need to do something. Than we managed to pull ourselves together and started winning again.

Karlovich: You are now two times Olympiad winners. What do you think of it?

Gunina: We are proud, but indeed there is a big difference between these 2010 and 2012 Olympiads. In Khanty-Mansiysk we won 11 matches in a row – and there was nothing to be sorry about. However the real team is made only through defeats, when you have to overcome the obstacles and difficulties. This time we had hard times but we managed to do well. I am proud of what we have done.

Kosteniuk: The trainers did their job well – and we are winners also because of their hard struggle to make us win these matches.

Karlovich: What about the team composition, how do you feel about it?

Najer: We are a very stable and firm team. Imagine, that our fifth board Natalija Pogonina won the Russian championship just before the Olympiad. Of course there are strong teams but none is such a balanced team as ours. We are really strong!

Kosteniuk: Comparing with the other Olympiad in 2010 Alisa Galjamova was replaced by Natalija Pogonina but that is a normal situation – we still remain to be a team which keeps its spirit and strength.