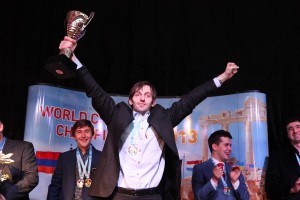 Grischuk triumphs for the third time as champion with Russia

This is the fourth World Team Championship title for Russia. Besides the one in 2013, they have won the gold in 1997, 2005, and 2010. This is the first time Kramnik, Karjakin, and Nepomniachtchi are part of the winning team, for Vitiugov this is a second title, while it is the third title for Grischuk.

Board medals were also awarded at the closing ceremony. Here is a photo report by press officer A. Karlovich. Scroll down for final standings by teams and boards.