The World Youth Chess Olympiad in Istanbul had a dramatic finish. Russia U16 team managed to get the gold medal in the very final minutes of the Olympiad, edging the team of Iran on second tiebreak. Just 1/2 game point separated the two teams as Russia defeated Armenia 3,5-0,5, while Iran got a 2,5-1,5 victory against Poland. Clear third place went for India. 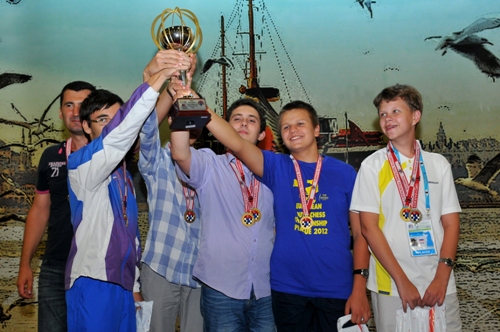 The World u-16 Youth Chess Olympiad ended with the prize ceremony held on the same day of the final round. The ceremony began with a minute of silence in memory of Ataturk, the founder of Turkish Republic and hearing of Turkish National Anthem and FIDE Anthem. Afterwards a short opening speech was given by Turkish Chess Federation(TCF) President and FIDE Vice President Ali Nihat Yazici. 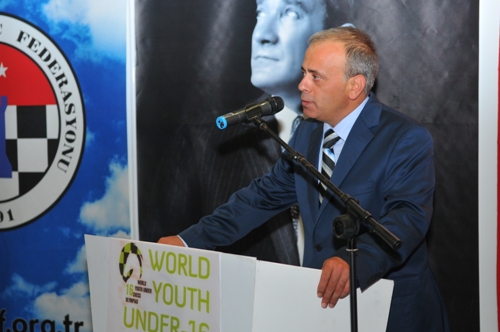 In his speech Mr. Yazici said that he is proud that such an exceptional event was organized by TCF in which young players had the chance to meet the greats of the chess world who came to play in the main Olympiad happening at the same time and the same place. Finally Yazici congratulated all teams and expressed his wish that young players who have competed in the Youth Olympiad now will replace their elders in the national teams of their countries and thus ended his speech.

The first special prize was given to the youngest player of the tournament, Moazaz Dhahir Habeeb (born on November 4, 2003) from Iran. The talented Iranian youngster got his prize from the chief arbiter of the event, Mr. Ulaş Demirci. 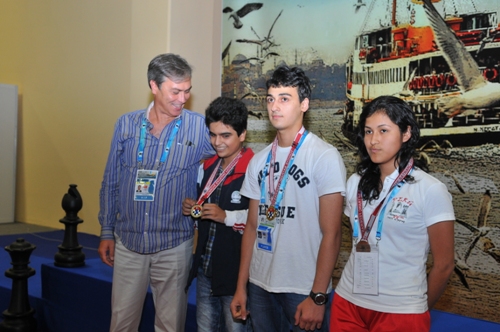 Afterwards it was time for awarding the board prizes. TCF General Secretary Erman Üsküdarlı was invited to award the board prizes of the reserve board. FM Pavle Dimic (Serbia), FM Shahin Loparizageneh (Iran) and Ding Tze How Dilwen (Malaysia) got the first three places among reserve players.
On fourth board Seyed Khalil Mousavi (Iran), Agil Pirverdiyev (Azerbaijan) and WFM Aurora Edith Felix Vega (Peru) got their medals from TCF Board Member Ömer Küçüközcan. 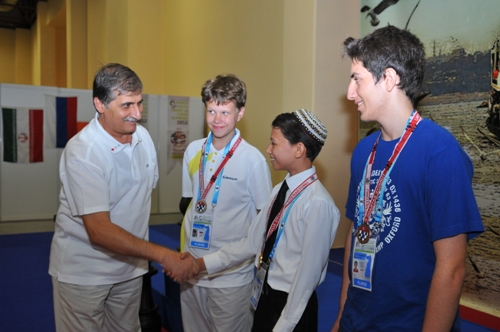 
FIDE EVE Secretary Theodoros Tsorbatzoglou was invited to give medals to the successful players on the second board. FM Maxim Chigaev (Russia) got the gold medal whereas Lee Kah Meng Elin (Malaysia) and Şiar Yaran (Turkey) were granted silver and bronze medals respectively. When the local player got his medal a big applause came from his friends and Yaran used the opportunity to thank them for their support.

The board prizes section of the ceremony ended with the first board. The young players got their medals from the famous International Arbiter Geurt Gijssen. Ayan Akhmetov (Kazakhstan) surpassed other strong players to get the gold with Tomas Laurusas (Lithuania) and Christopher Repka (Slovakia-A) taking the silver and bronze medals.

We congratulate all players with board medals once again for their extraordinary personal performances. Finally it was time for the best teams to come to the stage, the long-awaited section of the whole tournament. Firstly the fifth and fourth teams, Azerbaijan and Georgia, were awarded with special prizes. Both teams seemed to be happy with the nice surprises! After that the top three teams came to the stage. 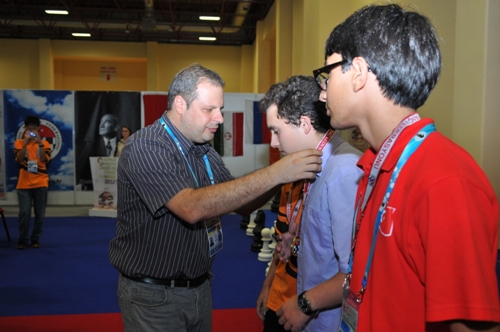 The third team India got also the bronze medal and wish them good luck in future tournaments.

The prizes and the cup of silver medalists, Iran, were given by ex-TCF president Uluğ Nutku. Although missing the first prize by the tiniest point gap Iranian team was seen as happy in the prize ceremony. Congratulations Iran! 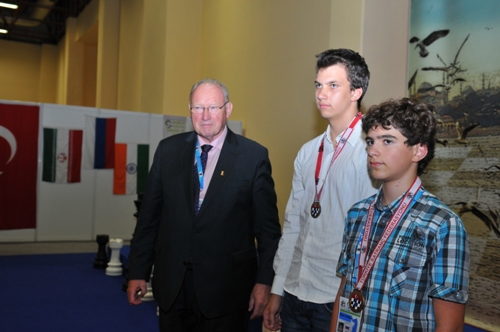 The star of the prize ceremony was of course Russia as the champion. TCF President and FIDE Vice President Yazıcı gave their medals and champions cup with a big applause and afterwards the Russian National Anthem was heard for another time in the prize ceremony of a chess tournament. 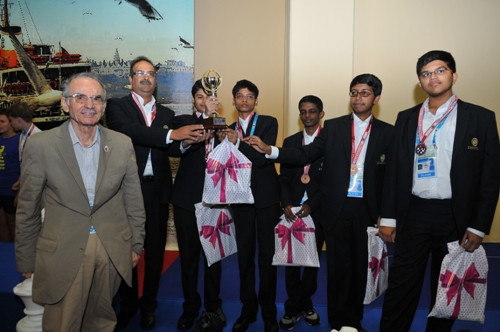 We congratulate the champion and silver- and bronze medalists heartily for their huge success, not forgetting the remaining teams who showed a good fighting spirit. As said at the end of the prize ceremony, the next World u-16 Olympiad is going to be held in Ankara, Turkey in 2014 and we hope to see all the participating countries there again! Let’s see if the Russian National Anthem will be heard in Turkey once more then.