Kasimdzhanov: Basically Topalov is an extremely strong player. I did not expect to win at all. I thought that we will play a game and we will have maybe a draw.

Then he ran into the opening problems. He seemed not to know the line I played with Be2 in Queen’s Gambit. Soon I realized that he does not have useful moves. It was in a way a slight accident. It just turned out that a position was really very very bad.

Karlovich: We were wondering in the press center. We all know that you were Anand’s second in his match against Topalov. Did you receive maybe a phone call from Anand who might advise you some line to play today? Or maybe you could use some preparation ideas from your work with Anand? How do you estimate today’s match?

Kasimdzhanov: Well, the point is that during my work with Anand our relations were kind of intense. But after the match we came to a decision to have a sort of rest from each other. Maybe Anand needed rest from my company even more than me. So, I don’t get many advises during a tournament. As for the preparation ideas, of course we looked at the line Be2 with Vishy and we found it an interesting try. It was not that ambitious to our mind.

But I hoped that my opponent would create some complications due to his fighting spirit. In fact, just couple of imprecise moves and his position became extremely bad.

As for the match today, we have very strong opponents today. But I hope it will end well, we are putting up a fight. Of course I still think that Bulgarians are favorites. (ed. note: Uzbekistan won 3-1) 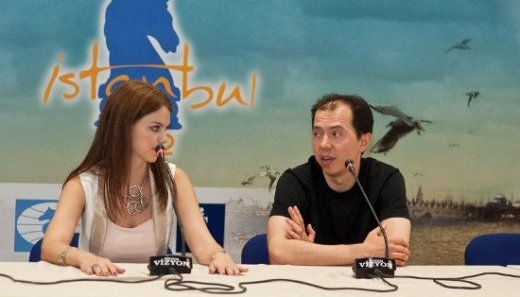 Karlovich: What is your performance here so far?

Kasimdzhanov: Well, I have a solid performance so far. I did not lose any game, I won two games. One of games I won was against Topalov, so it counts as three. Our second board Filippov is playing a tournament of his life. He has 6/5 out of 8 and one of the best performances in the tournament. I am very happy for him. Our other young teammates are struggling as well, putting up a fight. In general I am quite happy.

Question from a journalist: Rustam, you are qualified for the next World Chess Championship cycle. What are your expectations from this cycle, tell us about your preparations. And also we know that Tashkent will host one of the Grand Prix tournaments soon. How are the preparations going on?

Kasimdzhanov: I have not been on the top of chess for some years. So, naturally I did not know what to expect. In this Olympiad I think I am in a very good shape. I played against Aronian and Topalov, two strong players.

Maybe I can look forward for the Grand Prix with some optimism now. Of course it’s going to be a tough tournament. And I am not a favorite to win it, let’s put it this way. The level of other players grew much since 2004 when I won the Championship title. Young players are very strong now rather than me at that time.

As for Tashkent, yes, Tashkent is preparing to host the Grand Prix. We are doing nice job there. I think we will manage to do on a good level.

Kasimdzhanov: It was a very exciting experience. I have never done it before and most probably I will not do it again. I mean it is a unique chance to be with those guys, watch them, be with them when they play the tournaments of their lives. It was unbelievable experience.

First of all I never thought they would do so well. But when they are concentrated and when I try to help, it is an extremely satisfying experience. This is one of the happiest memories of my life, in fact.

If to compare a work for Anand, being his coach and second and my work in a team of course match is much tougher. Vishy by all means needs a preparation of a different level. With my German team, it goes like this: they come up to me, ask questions, I answer, we analyze for ten minutes and they are already happy. With Anand I don’t go to bed before four in the morning.

Karlovich: What were your feelings when you got to know that Anand won the match?

Kasimdzhanov: I was really happy that it was over. The match took half a year of my life. And I truly believe that this is the toughest thing that one can possibly do.

Karlovich: If to compare one match in Moscow and one match in Bulgaria. Tell us the difference, maybe in level of chess?

Kasimdzhanov: The main difference for me is that I became two years older. It became physically tougher for me, every tournament it becomes tougher and tougher. For Vishy I think the same.

Question from a journalist: Rustam, so many victories now for you as a coach and second, today’s victory against Topalov, maybe it is time to come back to real chess?

Kasimdzhanov: Of course I have my ambitions in chess which is my personal results in chess. This remains for good. Of course helping other people is also satisfying and rewarding. But the main goal and thing for me is my own play. I hope I will still play some good chess in the World Chess Championship cycle.