The eventful second day of the Saint Louis Rapid and Blitz finally produced a sole leader. Ian Nepomniachtchi of Russia, who is the only player so far to have defeated Garry Kasparov, is leading the tournament with 8 points.

Nepomniachtchi is being closely followed by a pack of players who are only a point behind. Fabiano Caruana, Quang Liem Le, Levon Aronian and Hikaru Nakamura all have 7/12.

Tomorrow the rapid portion of the event will conclude and the event still remains wide open for anyone to take it as there are still three rounds left. 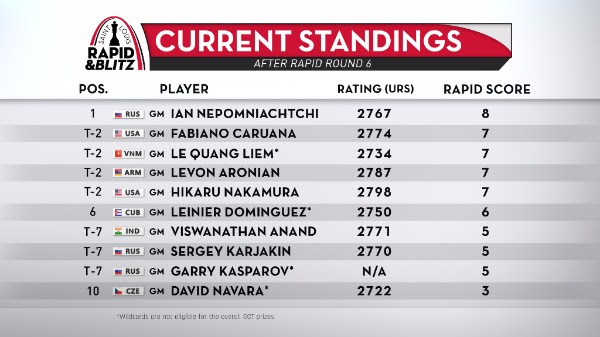 The day started off quite peacefully with three draws. David Navara, who only managed to make one draw yesterday, recovered by defeating Sergey Karjakin.

The only other decisive result came from Leinier Dominguez over Quang Liem Le, who was one of the co-leaders.

Garry Kasparov had an advantage with the black pieces against Levon Aronian but his poor time management played a key role as he blundered in the endgame allowing his opponent to force a draw.

Fabiano Caruana was close to defeating his compatriot Hikaru Nakamura, but with seconds left on his clock he played the second move of his variation instead of his initial idea and drew the game. Ian Nepomniachtchi and Viswanathan Anand played a lengthy but uneventful game.

This was the bloodiest round of the day with only one draw. All eyes were once again on Garry Kasparov’s game, who had the white pieces and the initiative. After getting slowly outplayed, trouble came when he blundered a tactical shot and was forced to accept defeat in the hands of Ian Nepomniachtchi.

Liem Quang Le and Levon Aronian entered a complicated battle where the tactics worked out better for the former.

Viswanathan Anand played yet another long game which proved to be fruitful against David Navara. The only peaceful result was between Hikaru Nakamura and Sergey Karjakin.

The last round of the day only produced two decisive results but it did include the meeting of the two giants: Viswanathan Anand and Garry Kasparov. In the critical moment, Kasparov found the tactical way of resolving his problems and the game quickly ended in a draw.

David Navara and Hikaru Nakamura played a very interesting game where the latter had four pawns for a piece in the endgame. The mishandling of the position by Navara allowed his opponent’s pawns to become too dangerous, which overwhelmed his position.

Levon Aronian and Fabiano Caruana’s game was the most tumultuous affair as the evaluation of the position kept changing. The Armenian grandmaster eventually came out on top when his passed pawn became unstoppable.

Leinier Dominguez missed an opportunity when he overlooked a piece sacrifice against Sergey Karjakin which would have given him a decisive advantage. Ian Nepomniachthci drew Quang Liem Le and took the lead of the tournament.