Levon Aronian emerged as the winner of the rapid portion of the Saint Louis Rapid and Blitz. He is being closely chased by Fabiano Caruana and Hikaru Nakamura, who are only a point behind him.

Ian Nepomniachtchi, who entered day three tied with Aronian, lost his last round game to Hikaru Nakamura and is two points behind the leader.

There are still eighteen games of blitz to be played over the next two days, so anything can happen!

All eyes, as usual, will be on Garry Kasparov as the chess world awaits to see his tactical skills in even shorter time controls. 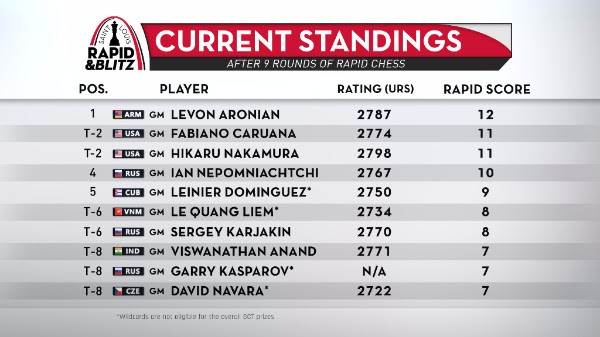 The round started positively for Garry Kasparov who played aggressively against David Navara, achieving a winning position. In the postgame interview, Navara revealed that he never once thought about resigning and his resilience paid off as Kasparov blundered a tactic and lost in the endgame.

Levon Aronian took the lead in this round by defeating Sergey Karjakin in a fine game where he slowly built up his attack, which left him with a decisive material advantage.

His closest rival, Ian Nepomniachtchi, only drew his game against Fabiano Caruana by sacrificing a piece to force a perpetual.

Finally, Garry Kasparov got his lucky break when his opponent, Quang Liem Le, inexplicably blundered a rook in an equal position and resigned. David Navara was not able to keep the momentum from his earlier win and he sacrificed two pawns against Leinier Dominguez to build an attack; the defensive resources of his opponent were enough to stop the initiative and score the full point.

Ian Nepomniachtchi made another draw with a threefold repetition, this time against his countryman, Sergey Karjakin. Levon Aronian was unable to extend his lead as his slight advantage against Hikaru Nakamura was not enough.

The two drew after most of the pieces came off the board. Viswanathan Anand and Fabiano Caruana drew their solid game as soon as they reached the required move 30.

This was the bloodiest round of the entire event with all decisive games! Garry Kasparov was on the losing side against Fabiano Caruana when he played too passively at the critical points and allowed his opponent’s passed pawns to become too dangerous.

Sergey Karjakin scored his first win of the event by punishing Viswanathan Anand for his only mistake. Quang Liem Le was on the winning side of the endgame, but as his opponent David Navara pointed out, in a rapid everyone makes mistakes. Le’s mistake was costly as he found his opponent’s passed pawns march down the board.

Ian Nepomniachtchi suffered his first loss of the tournament after he misplayed the drawn endgame and lost both of his pawns.

Levon Aronian took the lead by defeating Leinier Dominguez also in a rook endgame where his technique was flawless.