After day one of the blitz, Levon Aronian extended his lead to two points over his closest rival, Hikaru Nakamura.

Fabiano Caruana and Hikaru Nakamura entered the day tied for second place only a point behind Aronian, but Nakamura had a more solid day; whereas Caruana had more decisive results, but also too many losses.

It is worthy to remember that in the Paris leg of the tour, Magnus Carlsen also had a two point lead but Vachier-Lagrave actually leapfrogged him in round eight of day two.

Although a two point lead is significant, the tournament is far from over as there are still nine more games to go. 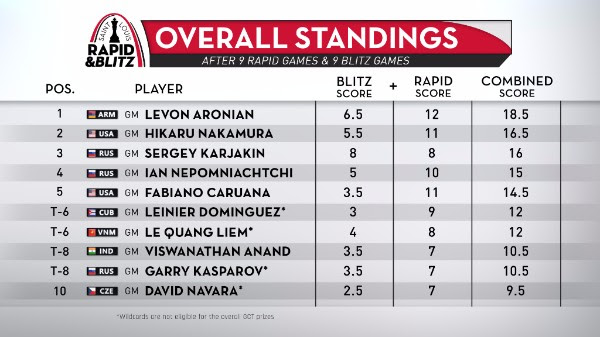 Levon Aronian started his day excellently by slowly extending his lead first to 1.5 points then to 2.5 points by round seven after defeating Garry Kasparov.

He had an extremely strong showing in the middle of the tournament by winning three games in a row only to stumble in round eight against Fabiano Caruana. He quickly recovered in the last round by defeating Leinier Dominguez and maintaining his lead.

Hikaru Nakamura had a similar result to Aronian’s with only one loss against Sergey Karjakin but he had too many draws. In the middle of the tournament, he made four draws in a row, including against Anand and Kasparov.

As one of the fastest players on the planet, he still has every chance to catch the leader, especially since the two will meet in the first round tomorrow. Nakamura will have the black pieces.

Sergey Karjakin had an incredible day by scoring a phenomenal 8/9. The current World Blitz Champion completely annihilated the field by giving away only two draws against Garry Kasparov and Levon Aronian.

The rapid portion was not kind to him, but this remarkable result allowed him to climb up in the standings to the number three spot, only half a point behind Nakamura.

Fabiano Caruana entered the day only a point behind Aronian and tied for second with Nakamura but now finds himself in the number five spot.

Even so, two of his wins were against Kasparov and Aronian. He will have the white pieces against Aronian tomorrow and might be able to spoil the Armenian’s tournament.

Quang Liem Le and Leinier Dominguez are tied for sixth and seventh places. The Vietnamese superstar got revenge for his embarrassing blunder against Kasparov by defeating him in a fine game.

His only other win was against Caruana. Dominguez, who was quite solid in the rapid, suffered five losses today and dropped by one spot in the standings.

The two legendary players, Garry Kasparov and Viswanathan Anand, find themselves on the bottom of the standings, tied for eighth and ninth places.

Just as in the rapid, Garry Kasparov scored only one win, this time against Leinier Dominguez. On the other hand, Viswanathan Anand scored no wins. He lost three games and drew six.

David Navara stayed in the last place after a tumultuous day. He lost four games in a row and scored only one victory against Le.

Even so, he is one of the most approachable and humble players, always happy to give interviews and talk to anyone even after having a bad day.