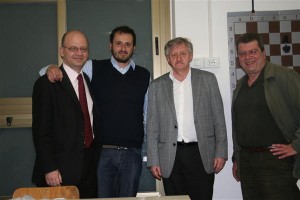 Italian chess, spearheaded by Fabiano Caruana, is continuously growing. The amount of activities of Italian chess players, combined with the numerous local tournaments grow on a daily basis. If there is a way to stay informed with the latest news from the region, that would be the Scacchierando website.

Scacchierando is the most popular chess blog in Italy with over two million pages read and one million visitors a year. The blog was created in 2005 by Stefano Bellincampi, who is the blog Director. He has been able to build up a team of writers who manage to cover most of the current events in the Italian and international chess scene. Over the years umpteen reports have been written about tournaments, often by chess fans participating in the event who want to share their experience through Scacchierando.

The blog also hosts many side events, one of the most intriguing being the Fantascacchi (Fantasy Chess) , which is a competition with prizes based on predicting results in important chess tournaments. Another fun part is the Scacchierando Chess Oscars, given to the best players and the best games of the year.

As a consequence of the blog reader’s considerable participation in the different activities, the Associazione Culturale Scacchierando was founded with the objective of promoting Chess as much as possible. Subscribing has numerous benefits, such as discounts on books and registration fees at tournaments or chess schools, and free admission to the chess workshops organised by Scacchierando , who have been conducted by GMs such as Michele Godena and Oleg Romanishin.