Obtaining an advantage in an hard fought middle game, Harikrishnan led the game into an exchange up ending. The Chennai boy handled the double rook versus a rook and bishop ending deftly to outwit the more experienced Nisha Mohota. The four hour game from Harikrishnan (ELO 1755) showed the strength and depth of Tamil Nadu players in chess, as he overcame Nisha Mohota (ELO 2323).

Top seed Grandmaster Aleksij Aleksandrov of Belarus had a relatively easy outing in the first board against Sarbajit Adhikari. Defending Champion and second seed Kravtsiv Martyn of Ukraine was fully stretched in his victory over S Vigneshwaran in the second board. Running into the last few minutes of his allotted time, Martyn found his way to win thanks to check mate threat through queen and bishop that fetched him an extra piece and the point. 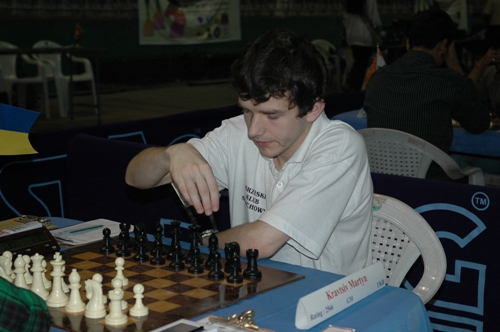 Speaking on the occasion, Shri JCD Prabhakar said, “Tamil Nadu holds great chess tradition in organizing mega chess events, and the Central Council of All India Chess Federation will be writing to the Government to confer “Bharat Ratna” to World Champion Viswanathan Anand”. He also extolled the decision of bringing chess to all the Schools in Tamil Nadu by Honorable Chief Minister J Jayalalithaa.