Russian portal Tribuna featured an article about the television show CSTB, where the Chess TV channel was officially presented. But large portion of the material was devoted to the game between Sergey Karjakin and the chess robot.

After the match, which ended in a draw, world rapid champion Karjakin gave a brief interview to Tribuna correspondent Vladimir Anzikeev.

Sergey commented about the game: “Of course, I often play against the computer, but this time the feeling was unusual, with the iron hand waiving in front of my eyes and making all the strong moves. I had to be at my best to hold the draw. By the way, the machine sacrificed a queen, to the delight of the spectators, to give perpetual check.” 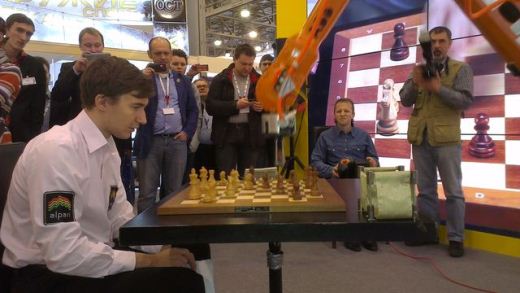 Sergey Karjakin against the chess robot

He also said that he was satisfied with the result in Tata Steel tournament, where he scored +3, which in 2009 was enough to take the first place. But this time Carlsen (+7) and Aronian (+3) were impressive.

On a question about his personal life Sergey said: “When your goal is to return the crown of the world chess champion to Russia, it is necessary to forget about the personal life. It is a strict regime, diet, fitness and training on the board for eight hours a day. I can’t imagine different recipe to become the world champion!”