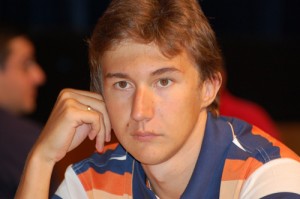 Sergey Karjakin is the new World Rapid Champion! He won the competition in Astana with 11,5/15, a full point ahead of the second Carlsen, after completing a fenomenal third day with 4,5/5. This adds yet another brilliant trophy to the carrer of Sergey Karjakin and one more time justifies the transfer that the Russian Chess Federation made a few years ago.

Magnus Carlsen was brilliant during day 1 and day 2 of the World Rapid chess championship in Astana. However, his third day games were in total contrast to the general performance so far. He started with a logical win against Ismagambetov, but scored back-to-back loses against Ivanchuk and Grischuk. A draw against Radjabov left him without much practical chances for the title, while in the last game he could have even lost the silver, had Veselin Topalov seen a forced mate in the endgame.

Topalov himself had yet another strange mixture of irregular performances. He made normal draws with Ismagambetov and Gelfand, and exploded in the right moment with a beautiful sacrifice in a key game against Grischuk. However, right when he was touching the silver, he missed the already mentioned mate in the game with Carlsen.

Grischuk and Mamedyarov had good chances for the bronze medals during the third day, up to the last moment they were possible top finishers. In the final table Grischuk has equal points with Topalov and will share the prize money with him, while Mamedyarov is half a point behind.

Sergey Alexandrovich Karjakin is born January 12, 1990 in Simferopol. He is a chess prodigy and holds the record for both the youngest International Master (eleven years and eleven months old) and youngest grandmaster in history (at the age of twelve years and seven months). He is currently 6th in the world with ELO rating 2779, while his highest mark is 2788 in July 2011.
During the Chess World Cup 2007, which served as a qualification tournament for the World Chess Championship 2010, Karjakin reached the semi-finals, in which he lost to Alexei Shirov. On the January 2008 FIDE rating list, published just before Karjakin’s eighteenth birthday, he passed the 2700 mark for the first time, with a new rating of 2732 and a world rank of 13.

In July 2008 Karjakin played a ten game rapid chess match against GM Nigel Short and won convincingly with a score of 7.5-2.5. In February 2009 he won the A group of the Corus chess tournament in Wijk aan Zee (category XIX) with a score of 8/13.

Later he also won the ACP World Rapid Cup which was conducted from 27 May to 29 May 2010. He defeated Dmitry Jakovenko in the final game by 4-3.

In November 2011 Karjakin tied for 3rd–5th with Vassily Ivanchuk and Ian Nepomniachtchi in the category 22 Tal Memorial in Moscow.