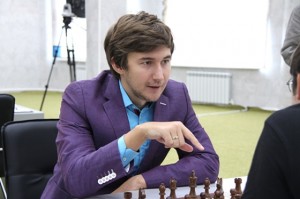 Karjakin is placed fifth on the Tata Steel 2016 starting rank list – can he climb to number 1 by the final round?

The highlight for Karjakin’s 2015 must be his performance in the 2015 FIDE World Cup, where he secured first place in a dramatic fashion. First, he defeated Pavel Eljanov in a spectacular set of chess games in order to secure his place in the finals. Swapping wins in the first set of rapid games and a win and a draw for Karjakin in the second set of games, he defeated the Ukrainian and moved on to the finals to face compatriot Peter Svidler.

After falling behind in a swift 0-2, Karjakin climbed back in a must win situation and eventually equalized the score. In one of the most exciting finishes to a tournament last year, Karjakin was able to come back from two games behind to an overall score of 6-4, after starting out on the back foot.

Sergey Karjakin is a veteran of the Corus/Tata Steel series. He has participated 7 times and has 1 win under his belt in 2009. Karjakin’s secret how to win the first super tournament of the year – the cold water of the Wijk Aan Zee sea.