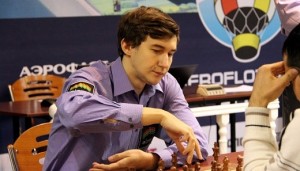 The Norway Chess super-tournament started with an interesting drawing of lots celebration, a blitz tournament. Sergey Karjakin took clear first place after getting 6.5/9 points. Interestingly, the Russian chose number 5 in order to get the white pieces in both his first and last games.

Both contenders of the upcoming World Championship, Magnus Carlsen and Viswanathan Anand, finished with 6 points. They were joined by American star Hikaru Nakamura with the same score. The tiebreak rules awarded Carlsen with second place, Anand third and Nakamura fourth.

Veselin Topalov did not have a good day at the office; he finished in the cellar after getting only one point in the whole event. His excellent form shown in the Zug Grand Prix makes us think that this just was a temporarily slip and that he will be fighting for the first place in the main event.

Norway Chess will be daily live on Chessdom.com with analysis. Daily reports, news, interviews, and information will be posted on the main page.