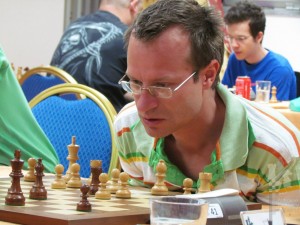 The 2018 Bunratty Chess Festival was held from 23 to 25 February. The venue was Bunratty Castle Hotel. It was divided in 4 sections. Masters over 2000, Challengers 1600 to 1999, Major 1200 to 1599, Minor under 1200. It was a record breaking event in many ways but mainly in having the highest number of players across the 4 events in it’s history, almost 360 players battled for the 4 titles at stake. In the Masters event we had many past champions playing, they included this year’s top seed and defending champion, Nigel Short GM as well as the second seed ( and the 2011 and 2014 champion ) Gawain Jones GM. The third seed was Luke McShane GM, who won the event in 1997 when he was just 14 year’s old ! All in all we had 8 past champions playing in the total field of 55 players in the Masters.
So we had a tie for 1st in the masters, so a blitz was arranged between Sergey Tiviakov and Gawain Jones , but amazingly enough, for the first time in it’s history, all 4 events were shared! This meant we had 4 blitz battles to determine the destination of the trophies.