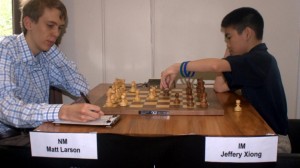 SAINT LOUIS (June 23, 2014) — The U.S. Junior Closed is playing into its familiar theme: Guess what happens next.
(Report by Brian Jerauld)

The 2014 national championship for players under 21, which began Friday at the Chess Club and Scholastic Center of Saint Louis, kicked off with several shocker upsets and has since proven extremely decisive — with only four draws through 15 games — leaving the first weekend of the 9-round, round-robin event more like a sprint through a minefield.

Sunday’s third round saw three of those draws, though the afternoon proved to be the most-exciting day of action yet. Four out of five boards entered simultaneous clock pressure as they neared their respective 40-move time controls, each of them at tense moments in their games, resulting in several dramatic pendulum swings between unclear outcomes.

Leading the event is GM Kayden Troff and IM Jeffrey Xiong (2.5/3), though both had their perfect starts checked down in the third round. Troff got away from the book early on Sunday but could not topple FM Justus Williams, whose half-point against the tournament’s lone grandmaster combines with his first-round upset over IM Sam Sevian for 1.5 points against the field’s top two seeds. Further proving the parity of the event, Xiong could not work an advantage against low-seed NM Matt Larson — who, forced to move with two seconds left on his clock, missed 40. Rd5 as an instant winner — but still scored his first half-point of the tournament against its leader.

Also finally scoring was Sevian, who had shockingly suffered two losses through the first two rounds, but was able to regain some composure against FM Michael Bodek on Sunday to tally a full point. IM Luke Harmon-Vellotti (2/3) went from bad to worse to winning in his patient victory over FM Arthur Shen, making it two in a row for the 2013 runner-up and moving him into clear second. IM Aleksandr Ostrovskiy and FM Josh Colas walked through the tournament’s only straightforward draw; both share in a four-way tie for third with 1.5/3.

In Saturday’s second round, Shen had lost his way in a clear mating attack and was forced to settle for a draw — but he wasn’t even that fortunate when he lost track on Sunday. Shen opened up with a considerable advantage, causing Harmon-Vellotti’s French defense to look awkward from the start with a badly cramped back rank. With the black monarch isolated on the kingside, Shen’s 17. Ng5 was more than writing on the wall.

“After Ng5, I’m just getting checkmated pretty much,” Harmon-Vellotti said. “Or at the least I have to give up a lot of material, but even then my pieces were hard to get over to the kingside to protect. After Ng5, I knew it looked pretty bad for me.”

The move kicked off a fluid assault for Shen, including a tactic-inducing 22. Bf6, and ultimately earned the exchange at 22…Rxc5 from Harmon-Vellotti to relieve some pressure. Shen’s 24. g4 further chased black’s forces backward — but then his downhill roll went off the cliff. Shen’s follow-up 25. g5 was an overextension, allowing 26…Neg6, which helped Harmon-Vellotti to immediately stall the mating attack. The error also trapped Shen’s bishop, losing it for compensation that only exposed black’s king, though not enough. Harmon-Vellotti was able to reorganize his own attack, pinning a white rook on the long diagonal to win back the exchange. He easily moved through a rook-and-pawn endgame.

Sevian wore the face of pure relief after Sunday’s win over Bodek. One of the pre-tournament favorites, Sevian admitted he had entered the third-round in a “must-win” state after his shocking 0-2 start. Bodek challenged Sevian’s psyche immediately with a suspicious — yet apparently prepped — 2…g5.

“When he played it, I thought he just played it out of the blue,” Sevian said of Bodek’s opening surprise. “But afterward, he told me he had prepared g5 against me — not deep preparation, though. I’m not sure g5 can be prepared that deeply.”

Sevian delayed his attention from it, instead completing development amidst a drastically closed board that went to the 21st move before the first capture. His first probe of the obscure pawn came at 12. h4, beckoning 12…g4 and rerouting the white knight to 14. Nd3 where it became choice. By 20…Ba8, black had become locked behind the board and sat waiting for white’s attack, of which Sevian complied with a strike toward the exposed kingside. Despite how long it took for the first capture to arrive, liquidation quickly followed.

Though Sevian was leaning on his advantage, time pressure took clear control of the game and left the outcome temporarily in doubt. After 30. Be4, both players were below a minute on their clocks, kicking off a frantic race toward time control on the 30-second per-move increment. Just before his bonus 30 minutes, Sevian dropped a pawn at 39. Qxh5.

The additional time, however, was enough to tip balance back toward the stronger player in the difficult endgame. Sevian capitalized after 44…h4? left nearly everything hanging and 47. Qa8! won the black queen.

Each round of the 2014 U.S. Junior Closed will see its first move daily at 1:00 p.m. CT through June 29, with a rest day on Wednesday. The tournament will be streamed live on www.uschesschamps.com, with commentary, analysis and player interviews by GM Ben Finegold and FM Aviv Friedman.

Recognizing the cognitive and behavioral benefits of chess, the Chess Club and Scholastic Center is committed to supporting those chess programs that already exist in area schools while encouraging the development of new in-school and after-school programs. For more information, visit www.saintlouischessclub.org.