It seemed close to impossible after the first two days, but Ian Nepomniachtchi lost his two-points advantage and gave up first place at the World Rapid Chess Championship in Khanty-Mansiysk. Shakhriyar Mamedyarov had an amazing final day, as he won all his five games to finish on 11.5/15 and get clear first place in this strong event.

Alexander Grischuk arrived as the pre-tournament favorite and had a good final day to end up in sole third place. The Russian even had a decent theoretical shot at winning the event in the last round. If he won his game against Ernesto Inarkiev and both Mamedyarov and Nepomniachtchi drew, he would have gotten the crown. However, this is not what happened and the Azerbaijani got the title.

Vietnamese star Le Quang Liem showed good chess all throughout the tournament, only losing against the gold and silver medalists. He finished fourth with 10/15 points.

Ten players finished on 9/15. Two 2700+ rated are in this group: Nikita Vitiugov and Rauf Mamedov. Dmitry Andreikin seemed like a strong candidate to finish at the top of the standings, but also finished in this big group. He will be playing the very demanding Tal Memorial next week in what might become his rise to the elite.

The strong line-up left some strong players disappointed with their results. Gata Kamsky, Ruslan Ponomariov and Alexei Dreev had good chances to finish in higher positions, but culminated in the middle of the standings table with 8.5 points. All of them will have a chance to go for first in the blitz event that begins tomorrow. Full standings below

On a different note, the host city not only organized these strong elite events, but also gave amateurs the chance to show their skill and enjoy the royal game. No less than 83 amateurs and veterans gathered for an outdoor tournament next to the Ugra Chess Academy.

“During warm seasons we often organize the tournaments in open air,” – said the chief arbiter of the tournament Natalia Popova. “Sometimes we even have the tournament in the central square of the city where we also organize family tournaments. This competition is dedicated to the World Rapid and Blitz championships that are taking place now in Khanty-Mansiysk”.

The President of Ugra Chess Federation, the Mayor of Khanty-Mansiysk Vasily Filipenko mentioned at the Award Ceremony that this was the first amateur tournament organized in the frames of the World Rapid and Blitz Championships. “We are planning to organize such kind of tournaments in the future as well. We had this idea long ago, but brought ourselves to make it only this year,” – said Vasily Filipenko. 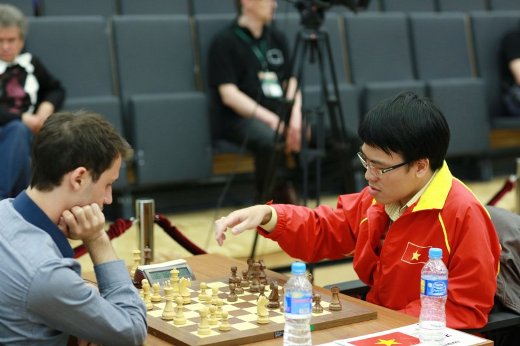