The fourth round of the FIDE World Chess Sharjah Grand Prix was played today at the Sharjah Cultural and Chess Club.

Shakhriyar Mamedyarov defeated Michael Adams in an aggressive display of the Queen’s Gambit Exchange variation. White got better out of the opening, but black has put up an inspired defence. Only in the time trouble Adams erred by missing 35…b4 and white duly converted the advantage.

Li Chao improved on an earlier game of GM Kuzubov to achieve certain advantage against Evgeny Tomashevsky. The Russian was a little bit conservative, missing the most principled moves, for example 17…exd4 with next 18…c5. Also, black could have tried for more complicated 33…Nxd1 34. Bc6 (34.Qxb6!?) Nxf2 with next 35…Rxc6. Li Chao did not allow further opportunities and quickly wrapped up the game. 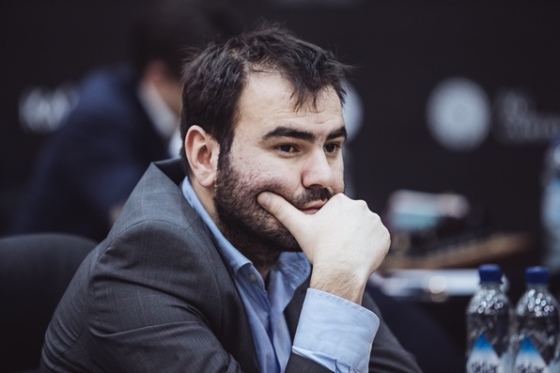 Maxime Vachier-Lagrave and Shakhriyar Mamedyarov are in the lead with 3 points each, followed by Hikaru Nakamura on 2,5 points.

The top two finishers in the four-tournament series, which will also include competitions in Moscow, Geneva and Palma de Mallorca, Spain, will qualify for the Candidates tournament next year to select a challenger for the World Championship. There are 24 players in the competitions, with each playing three of the four tournaments.