The third round of the FIDE World Chess Sharjah Grand Prix was played today at the Sharjah Cultural and Chess Club.

The top two finishers in the four-tournament series, which will also include competitions in Moscow, Geneva and Palma de Mallorca, Spain, will qualify for the Candidates tournament next year to select a challenger for the World Championship. There are 24 players in the competitions, with each playing three of the four tournaments.

With a new exciting format each GP stage is a 9-round Swiss competition with 18 participants. However, as several players noted in the interviews, there are no easy pairings in the first couple of rounds, and everyone gets a world-class opposition right from the start.

The only win in the third round was achieved by Hikaru Nakamura who defeated Richard Rapport in an exciting game full of beautiful tactical motifs.

The American Grandmaster participated in the previous Candidates Tournament in Moscow. Rapport, true to his reputation, has not made any draws so far.

The tournament leader Maxime Vachier-Lagrave was held to a draw by Shakhriyar Mamedyarov. Passing through the doors of the press center, Mamedyarov immediately asked where he had missed the victorious continuation. Vachier-Lagrave admitted that he had been lucky to escape with a draw. 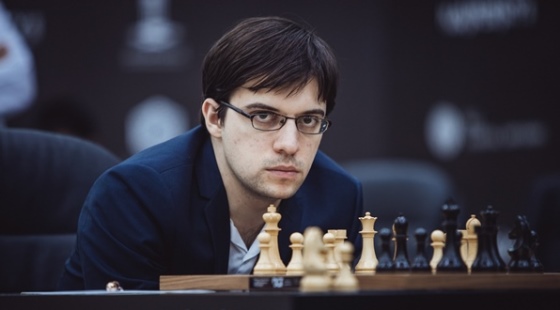 Vachier-Lagrave is leading with 2,5 points, followed by Mamedyarov, Nakamura and Adams on 2 points each.

Each Grand Prix has a prize fund of 130,000 euros, with 20,000 euros for first place. The series is being organized by Agon, the company that holds the commercial rights to the World Championship, under the auspices of the World Chess Federation.