Top-seed Fide Master (FM) Viktor Matviishen of Ukraine and Candidate Masters (CM) Omran Al Hosani and Sultan Al-Zaabi, the highest-rated Emirati players in the tournament, hurdled their first-round assignments on Wednesday as the rest of the top-seeded players took off to a winning start in the 14th Dubai Juniors Chess Tournament – Sheikh Maktoum Bin Hamdan Al Maktoum Cup at the Dubai Chess and Culture Club. 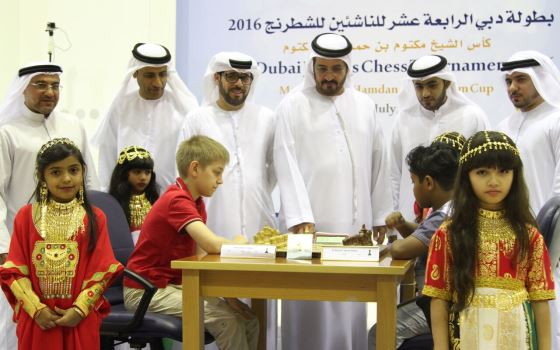 Mohammad Husseini, Executive Director of the club and tournament coordinator, and Emirati International Arbiter (IA) Mahdi Abdul Rahim, led the players’ meeting earlier in the day to explain the tournament regulations, including the mechanisms implemented to prevent any form of cheating during the tournament.

“Dubai Juniors Chess Tournament has been recognised as an important training ground for some of the best young players in the world,” said Al Bannai. “Many of the participants in the past 14 years have become among the leading grandmasters of this generation, and we are therefore proud to have contributed to their success in the sport. With 110 top junior players from a dozen countries competing this year, Dubai Juniors continues to reaffirm its status as premier event for junior players from around the world.”

Al Banai also expressed his gratitude to Sheikh Maktoum Bin Hamdan Bin Rashid Al Maktoum for the strong support to the club and chess in general, as well as the Dubai Sports Council, which has been a key benefactor of club’s major activities, including the Dubai Open.

Al Banai said the tournament is part of the club’s efforts to promote the sport among the youth with players from different schools from all over the UAE taking part in the competition. He also revealed plans to organise a new edition of the Arab Junior Chess Championship.