Grandmaster SP Sethuraman of PSPB continues to remain alone at the top with 7.5 points, at the end of the eleventh round of the SIB-CMS Zone 3.7 & 52nd Indian Premier Chess Championship, organised by Kottayam Chess Academy at the college campus, today.

GM Deep Sengupta of PSPB joined Sahaj Grover on the second spot with 7 points each, but Sahaj has to play only one game in the remaining two rounds.

In a Scotch game played by Deep, his team mate and former national champion Abhijit Kunte’s knight sacrifice on 13th move did not yield fruitful results. Though Deep lost exchange and a pawn later, his three connected pawns on the queen side played a vital role. When Deep’s c6-pawn was threatening to gear up to eighth rank by sacrificing two minor pieces for a rook, Abhijit gave up the fight. 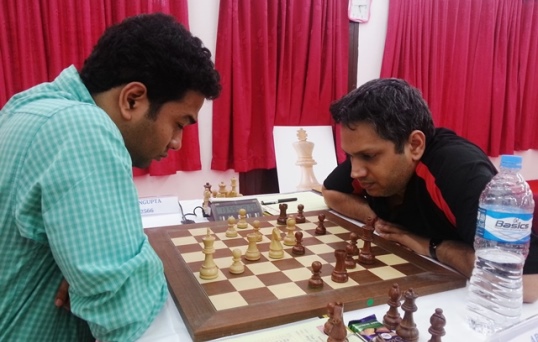 The clash between the only two grandmasters of Railways, RR Laxman and Deepan Chakkravarthy had some exciting moments, before Laxman prevailed over Deepan in a Dutch defence, played by Deepan. Deepan’s miscalculations in attacking Laxman’s queen with his knight backfired and he had no hesitation to resign immediately. It was a sort of consolation and compensation to Laxman, who lost a winning game against Vidit Gujrathi, a few rounds earlier. Deepan had an ignominious hat trick of losses. 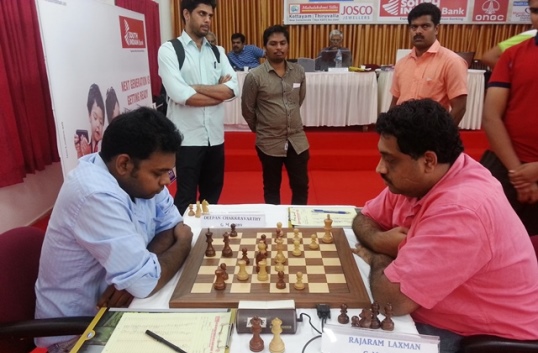 GM Deepan Chakkravarthy had a hat trick of losses

The most anticipated clash between the two highest rated players in the tournament GM Vidit Santosh Gujrathi of PSPB and his team mate Sethuraman ended in a tame draw. After exchanging the queens on 22nd move of a French defence adopted by Vidit, they agreed to share the point on 26th move.

Delhi grandmaster Sahaj Grover and Tamil Nadu IM P. Shyam Nikil split the points equally between them in a Spanish opening, extending to 41 moves. In a rook and equal pawns ending, both players failed to make any progress. 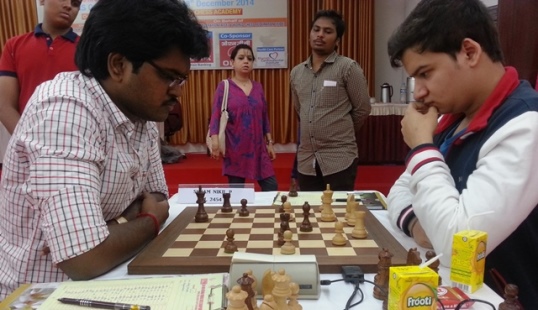 IM PDS Girinath of Railways parried the threats arising from PSPB grandmaster MR Lalith Babu’s Caro Kann defence. Despite the presence of doubled pawns in a rook ending, Girinath defended stoutly to get away with half a point after one move short of a century.

Similarly, the Larsen’s attack by Swayamas Mishra of Orissa against VAV Rajesh of Tamil Nadu also ended without any decisive result. They added half a point each to their kitty, after 26 moves.