ST. LOUIS, July 29, 2016 – It is the summer of sports – but Rio is not the only international competition gaining attention in August. The world’s top chess players are headed to the Chess Club and Scholastic Center of Saint Louis (CCSCSL), located in the U.S. Chess Capital, Aug. 5-16, to compete for a total prize fund of $300,000 in the pinnacle of chess tournaments held on U.S. soil – the Sinquefield Cup.

The Sinquefield Cup is the third of four stops on the 2016 Grand Chess Tour (GCT) – a circuit of international chess events featuring the world’s elite chess talent, created in partnership between the CCSCSL, Chess Promotions, Ltd. (London Chess Classic) and the Kasparov Chess Foundation. The tournament is named after Dr. Jeanne and Rex Sinquefield, founders, founders of the CCSCSL.

The 2016 Sinquefield Cup features ten of the top international chess players from eight different countries. Grandmaster Fabiano Caruana, now a Saint Louis resident, is entering the tournament with home field advantage after taking the U.S. Championship title at the CCSCSL in April.

Another top-ranked American, GM Hikaru Nakamura, is coming off a noteworthy win, beating the No. 1 player and World Champion, Grandmaster Magnus Carlsen, for the first time ever this July.

The third U.S. player ranked in the top ten, GM Wesley So, is coming back to Saint Louis as the U.S. Championship runner-up, and GM Levon Aronian from Armenia may be experiencing a career comeback, as the defending Sinquefield Cup champion returns to try and claim the title once again.

In a recent field change, GM Vladimir Kramnik regretfully withdrew from the Sinquefield Cup due to health issues. The CCSCSL invited fellow Russian, GM Peter Svidler to replace Kramnik as the 10th participant in the tournament. GM Svidler is a seven-time Russian Champion, 2015 World Cup runner-up and participated in the 2016 Candidates tournament. 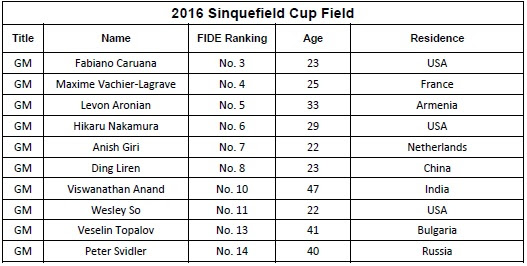 “Top grandmasters view Saint Louis as the hotbed for chess, and this year’s competition for the 2016 Sinquefield Cup is at an all-time high,” said Tony Rich, Executive Director of the CCSCSL. “It’s an exciting time to be a fan of chess as the sport continues to become more fiercely competitive and popular.”

The 2016 Sinquefield Cup will be streamed live daily on www.grandchesstour.org, featuring play-by-play and analysis from the world-renowned commentary team of GM Yasser Seirawan, GM Maurice Ashley, and WGM Jennifer Shahade. Live spectators may view the action in the tournament hall and enjoy additional GM-led commentary on-site.