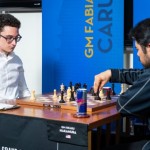 Magnus Carlsen’s prediction of four draws and one long decisive game came true. While the leaders drew quickly, Fabiano Caruana’s win over his countryman Hikaru Nakamura allowed him to join the pack. There is now a five-way tie for first, an uncommon occurrence at highly contested top level events. Interestingly enough, none of the leaders will be facing off in round five. As tomorrow is the final round before the day off, the players are expected to exhaust every resource in order to score a full point and break away from the pack. Stay tuned for an exciting day!

Fabiano Caruana had a novelty prepared months ago and was finally able to unleash the surprise weapon against his Olympic teammate. Caruana thought that his opponent played logical moves but not necessarily the best ones and found himself in an unpleasant position. The big mistake came on move 36, when an incorrect pawn capture by Nakamura ruined his pawn structure. In addition, his uncoordinated pieces and weak king, made the resignation inevitable.

Besides Maxime Vachier-Lagrave, the World Champion is the only other player to have essayed the sharp Sicilian defense. Anand decided to avoid the main lines of the Open Sicilian and played a popular sideline. Carlsen was happy to have been able to take the one chance to play actively, thus avoiding a worse position. His kingside attack looked dangerous but due to the lack of pieces and Anand’s excellent defensive knight, it was impossible to achieve progress. The game petered out into a drawn endgame.

So far, both players have been struggling in the event, but having the white pieces, Wesley So was looking for his first win. So got a pleasant position, which commentator Yasser Seirawan believed he could win 80% of the time, but Karjakin disagreed, thinking that he was only slightly worse. The American chose the wrong plan, centralizing his rooks instead of committing to a kingside attack. This allowed Karjakin to quickly find counterplay on the queenside and solidify his position. The opening of the structure was the beginning of the many trades that led to an opposite color bishop ending that quickly ended in a draw. 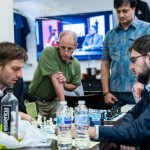 Once again, the Frenchman’s beloved Najdorf was put on trial. Grischuk repeated the line that Anand played against Vachier-Lagrave in round two. Black deviated from that game, repeating a line he had played during the Grand Prix last year. Vachier-Lagrave played a novelty and the game became very complicated, allowing White to sacrifice a full rook for compensation and an attack. Grischuk took a long time at the critical moment but decided to repeat the position instead of entering the unnecessary complications.

Neither player showed up with a great will to fight. Aronian essayed the variation of the Queen’s Gambit declined that is named after him, a line that is ultra solid for black. Mamedyarov either did not have anything prepared against this or he felt that consolidating his position in the tournament was more important. In any case, Aronian had no problems equalizing with black and a quick repetition of moves sealed the draw in 52 minutes.