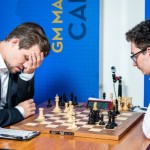 A large crowd gathered at the Saint Louis Chess Club to watch the encounter between the World Champion and his challenger. The face off attracted so much attention that only media was allowed in the playing hall for the first 15 minutes of the game, while the fans patiently waited their turn. The game eventually ended in a draw, but the final result does not tell all the drama that happened during the four hours of gameplay. As this was their final official classical game, the chess world will have to wait until November to see Carlsen and Caruana battle it out once again, this time for the World Championship crown. There were no other changes in the standings as the rest of the games were also drawn. Going into the final stretch of the tournament, Fabiano Caruana is still leading by half a point.

The World Champion started the game with 1.e4, and Caruana decided to stay loyal to the Petroff. Carlsen managed to get a slight advantage out of what seemed like a dry position. His advantage kept growing even though Caruana played the best moves according to the engines. Carlsen was closing in on his opponent when he found himself low on time. The looming time trouble and Caruana’s resourcefulness allowed the world championship contender to miraculously save the game. At one point, Carlsen went into the confession booth and made a shushing gesture, leaving everyone speculating the meaning behind it. He later explained that he thought he was already winning and wanted to have a little fun. Upon seeing the video, Caruana also assumed that his opponent was under the impression that the game was over, finishing his thought with “but it wasn’t!” Carlsen was seemingly disappointed with his play, notably with his failure to be practical and make decisions. He remains half a point behind Caruana. 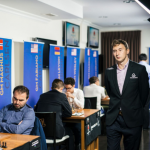 This fascinating Najdorf would have been the game of the day were it not for the Carlsen-Caruana game. The 19-move theoretical line resulted in a complicated position, with equal chances for both players. Coming off of his third loss in this tournament, Karjakin really needed to stabilize while Mamedyarov, who is trailing the winner by half a point, needs to close the gap with a win. The game was near perfect, as both players found the best moves in the position. Eventually, the game petered out to a draw in a bishop endgame with not enough pawns on the board.

Aronian was clearly playing for a win and came up with interesting and unusual ideas in the middlegame. He chose a rare line in the Catalan and the players found themselves in an unknown territory after So’s novelty on move 13. White had an advantage but did not play ambitiously enough. So made the correct decision of exchanging queens to transition into a passive endgame which was enough to hold the draw.

Vachier-Lagrave was surprised by his opponent’s decision to play a line that led him to a worse position. The Guicco Panno variation left white with the pair of bishops and a long term advantage with no risk. Nakamura suffered for most of the game, but true to his style resolved his problems in a tactical manner. The Frenchman’s play was too straight forward, which allowed Nakamura to neutralize his advantage. Not finding a better continuation, Vachier-Lagrave exchanged the pair of rooks and one of his bishops for a knight. The resulting opposite color bishop endgame ended in an easy draw.

This was one of the most balanced games of the day, with neither player making any big errors. The players essayed one of the most popular openings at the top level these days, the Giuoco Piano. In a closed position, the players maneuvered until move 20, when the pawn exchanges in the center opened the position. The change of the pawn structure resulted in piece exchanges, reeling the game towards a draw.