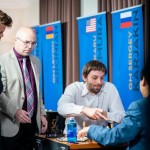 After another peaceful day in Saint Louis, American Fabiano Caruana remains half a point ahead of the field. He is still being chased by a pack of players, including World Champion Magnus Carlsen. In the final round, he will be facing off against his Olympic teammate Wesley So, while his other teammate Hikaru Nakamura will have the black pieces against the World Champion. A win would clinch the title for Caruana, while a draw would open the door for a possibility of a playoff. With the tickets to the Grand Chess Tour finals in London still on the line, the final day is going to be a nailbiter!

Caruana had a slight advantage out of the opening but it was not enough for him to keep the pressure on. There was one key moment in the game where the computers pointed out an improvement for him, but it wasn’t something that Caruana had considered and jokingly said that it was too sophisticated for him. He still remains half a point ahead of the field, and a tournament win would earn him a qualification spot to London.

In their last encounter in Biel, Mamedyarov won with the white pieces but there was no repeat this time. The commentators believed that white’s position was better, but Carlsen reached equality by playing all the top moves suggested by the engines. In the endgame, the World Champion had an extra pawn, but his triple pawns on the e-file hindered any progress that could have been made.

“For quite some time, it was my emergency idea” – Alexander Grischuk on his decision to play 1.f4. The last time this unusual move made an appearance in the Grand Chess Tour was in 2017 when Magnus Carlsen tried it out against Michael Adams with success. The position transposed into a Benoni structure, which was favored by the commentators and Levon Aronian who was spectating. The Russian Grandmaster blundered a pawn but for some reason So didn’t press for a win and ended the game with a repetition. 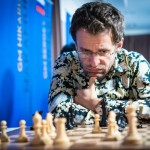 The Armenian chose the Berlin Defense, an opening line that he defeated with the white pieces in round one. He actually had a slight edge with the black pieces but Vachier-Lagrave quickly sensed the danger and quickly exchanged the pieces to enter an opposite color bishop endgame. The game quickly ended in a draw thereafter.

Neither player is having a great tournament so there wasn’t a lot of fight in this game. Sergey Karjakin essayed a line that was once played by his second Alexander Riazantsev. Nakamura played a novelty at the end of a long theoretical line. There was one key moment in the game where he could have transitioned to a position where he had a rook with a dangerous passed pawn on the seventh rank against two minor pieces. Instead, he decided to liquidate and enter an equal rook endgame that soon ended in a draw.