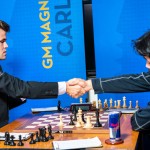 The tradition of no repeat winners in the Sinquefield Cup ended in the most unexpected fashion. At the end of the day, there were three winners! Fabiano Caruana, Magnus Carlsen and Levon Aronian tied for first place, while Caruana also tied for fourth place in the Grand Chess Tour standings with Wesley So. According to the rules, one of the players would have to be eliminated by a drawing of lots in a three-way tie, meaning that Caruana could potentially play two tiebreaks: One for the Sinquefield Cup and another for the Grand Chess Tour. The three players decided that they would rather share the title than have one of the players eliminated from participating in playoffs due to random chance. Hikaru Nakamura, Levon Aronian and Maxime Vachier-Lagrave qualified for the Grand Chess Tour Finals, while Fabiano Caruana and Wesley So will battle it out tomorrow for their ticket to the finale in London.

Caruana once again chose the Petroff Defense, which keeps serving him quite well. His countryman made the strange decision of not playing a more aggressive system, and odd choice considering he needed to a win to secure his spot in the Grand Chess Tour finals. Caruana had no trouble drawing the game and thus securing at least a tie for first place. 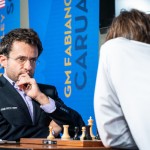 Coming into the round, both players were half a point behind the leader. Levon Aronian thought his opponent was in a more vulnerable situation, because he needed a win to qualify to the finals, while Aronian only needed a draw. The psychological warfare played a significant role, as Aronian decided to play a risky sacrifice in order to take advantage of his opponent’s looming time trouble. After Grischuk moved, Aronian instantly sacrificed a rook, surprising the fans and commentators alike. Then he simply took a confident stroll away from the board. Grischuk was clearly caught off guard and was not able to play with precision while low on time. Aronian won the game in fantastic style, thus securing a tie with Caruana.

There were no fireworks in this game, but it was a trademark Carlsen win. Historically, the World Champion has been a difficult opponent for Nakamura; their lifetime score is 12-1 in favor of Carlsen, not counting the draws. The game was quite balanced throughout until the American made the dubious decision of giving up a pawn in the endgame. Perhaps he thought that he had a fortress, but Carlsen has famously declared that he doesn’t believe in fortresses. The 97 move struggle eventually ended in Carlsen’s favor, propelling Magnus into a tie for first, while coincidentally helping So tie for fourth place with Caruana in the Grand Chess Tour standings.

The former World Champion ended the tournament with nine draws. Mamedyarov was another player who was chasing the leader by half a point, but never had a chance to play for a win with the black pieces. At the end of their long, theoretical battle, Anand had a slight edge with the white pieces but was not able to create real winning chances.

The Russian Grandmaster’s nightmare tournament finally came to an end when he managed to eke out a draw in a torturous endgame. First he was down one pawn in a rook and bishop ending, and finally was down two in a rook endgame. Nevertheless, the minister of defense held on to the bitter end, forcing the Frenchman to surrender a half point after a long struggle. While Maxime might have been disappointed to not win this one, qualifying for the final in London will certainly ease his woes. As for Karjakin, the draw ensured that he was not alone in the cellar, as it was just enough to catch Hikaru on three points.