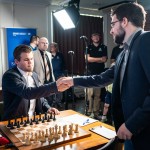 Day one of the 2018 Sinquefield Cup produced two early leaders: Levon Aronian and Shakhriyar Mamedyarov. While Aronian is no stranger to success in Saint Louis, having won the Sinquefield Cup in 2015 and the Saint Louis Rapid and Blitz in 2017, Mamedyarov is making his debut as an official player in the Grand Chess Tour. His first ever classical game in Saint Louis was a one sided affair, where his opponent Wesley So never had any chances of equalizing. For once, Levon Aronian was on the white side of the Berlin Defense, showing off both his flexibility and flawless technique in a fine victory. The fighting spirit of the players is high and round two promises to bring more excitement!

The Azeri grandmaster made it clear that he’s here to fight with 8.h4!?, ignoring his own king and trying to build an attack. The burden fell on his opponent to find fault with White’s aggressive idea. So attempted to destroy White’s center, but he transitioned into an endgame prematurely, thus falling behind in development and still allowing his opponent’s initiative to carry on. Mamedyarov played a perfect game thereafter, transitioning into a rook and pawn endgame which he converted without any troubles whatsoever.

This particular Berlin Wall couldn’t be salvaged, not even in the hands of the minister of defense. Aronian has recently switched to playing 1.e4 and has played it exclusively in the Saint Louis Rapid and Blitz. He felt that he has had a dreadful year and needed something new to get himself excited about chess again. The choice worked out well for him this game, as he got an excellent position against the Berlin. He slowly outmaneuvered his opponent until move 53, where Aronian spent over 40 minutes after missing a resource. Unfortunately for Karjakin, his position couldn’t be salvaged. Aronian’s deep think allowed him to see the position with newfound clarity and bring home the full point with precision.

Last year, Vachier-Lagrave defeated the World Champion in a complicated battle with the black pieces and then went on to win the event. This year the Frenchman also didn’t shy away from complications, and played an early h-pawn push much similar to Mamedyarov. Black had an inferior position due to his light square weaknesses, but Vachier-Lagrave’s mistake came on move 15 when he decided to close the kingside, a decision he regretted later during his postgame interview. The structural changes didn’t favor White, but the position didn’t have enough to offer for Black fo press for a win. 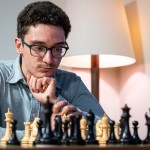 Caruana could have joined the two leaders, but a few key mistakes cost him the half point. He got a pleasant position with a space advantage in the middle game, then transitioned into an opposite color bishop endgame where only he had chances to win. With a big advantage on the clock and the board, Caruana was a heavy favorite to score the full point. Unfortunately for him, two inaccuracies allowed Grischuk to liquidate to a pawn down endgame that was easy to draw due to the opposite color bishops.

Hikaru Nakamura – Viswanathan Anand ½-½
Nakamura’s opening novelty was a bit mysterious. He made a bishop move, then retreated his bishop back a few moves later. It was a pretty typical structure that arises from the Queen’s Gambit where Black has an isolated pawn. Anand had no trouble exchanging the problematic pieces and getting rid of his weakness, thus reaching complete equality. The players agreed to a draw on move 29.