Day one of the first classical event of the Grand Chess Tour was full of fighting chess and decisive results. Even with slower time controls, it is clear that the players came to play.

Levon Aronian, Maxime Vachier-Lagrave and Sergey Karjakin started the tournament off well as they defeated their opponents in a fine manner.

Levon Aronian, who has already won two top level events this year, was particularly impressive as he completely annihilated Ian Nepomniachtchi right out of the opening.

If the rest of the tournament is even half as exciting as round one, then there is a lot of great chess to look forward to for the fans! 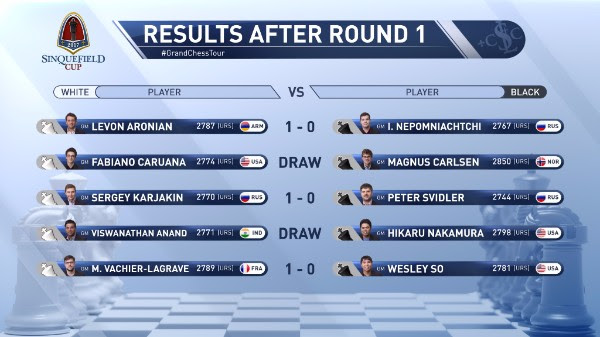 The Armenian came to the game well prepared and played a novelty on move 9. Finding a new idea so early in the opening takes the opponent out of their comfort zone and puts the pressure on them to start thinking from early on in the game.

Nepomniachtchi, relying on his memory, reacted quickly and even sacrificed a pawn but then went into a deep think trying to find compensation for it. Unable to do so, he found himself in a completely lost position quickly and was forced to resign as his opponent did not let the advantage slip away.

Maxime Vachier-Lagrave vs Wesley So 1-0

White got an advantage out of the opening as Black did not handle the position very well. The Frenchman had a nice grip on the queenside and gave his opponent a chronic weakness, the b7 pawn which eventually caused the downfall of Black.

Wesley So’s major mistake was opening up the center, which allowed his opponent’s pieces into his camp and weakened his own king. Vachier-Lagrave used his light square bishop to capture the b7 pawn, forcing his opponent to resign.

Up until move 13, this all Russian match was following the game between Vachier-Lagrave and So until Svidler decided to deviate. Just as in the aforementioned game, Black made the mistake of opening up the center instead of letting it be. This allowed white to win a clear pawn while Black’s attack never took off.

After enough pieces were traded off, Svidler was forced to resign even though he was up the exchange, as Karjakin queenside pawns were set to promote.

This match was set to be the most exciting one as Carlsen had defeated Caruana in a previous year’s Sinquefield Cup with the Black pieces. This time around, the game was much more balanced and neither side had any real winning chances.

Being the fighter that he is, Carlsen declined a perpetual and tried to play for more. Correctly sensing the danger, Caruana gave up a pawn and forced a perpetual himself to end the game in a draw.

Historically, Nakamura is a problematic opponent for Anand. The former World Champion played quite conservatively today, not giving his opponent any real problems to solve with the Black pieces.

The game ended in a three-fold repetition as neither player wanted to create complications, though it was Nakamura who could have played on and tried to win.