Today was the most peaceful round so far with all draws, but the results don’t tell the entire story! Maxime Vachier-Lagrave had a dominating position against Peter Svidler, but one slip allowed his opponent to solve all his problems tactically.

Fabiano Caruana also had great winning chances against Ian Nepomniachtchi but the position was very complicated with a lot of room to error.

Sergey Karjakin and Levon Aronian, both of whom suffered tough losses yesterday, played a quick draw.

In the all American match up of Wesley So and Hikaru Nakamura, the current U.S. champion was pressing with the white pieces but could not convert his extra pawn.

All eyes, once again, were on Magnus Carlsen who had to face another rival, Vishy Anand. The World Champion won a pawn tactically, but the resulting rook endgame did not offer winning chances. Carlsen, Vachier-Lagrave and Caruana remain in the lead. 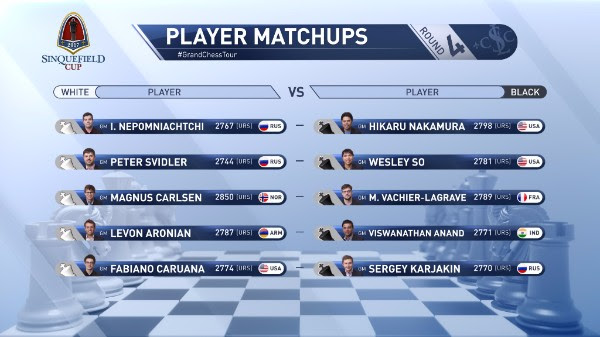 Once again, this game was the center of attention as all chess fans remember the epic World Championship battles between two players. It was as long strategical battle turned into a long rook and knight endgame battle until Anand blundered a pawn.

Winning the pawn meant simplifying the position into a rook ending, where Carlsen could not use his king without losing a pawn. The former World Champion made a draw without any trouble.

Yesterday was an unfortunate day for both players as they both lost their games. Usually, tough losses require recovery time and it seemed that neither player wanted to go for complications today. Aronian was unhappy with his position and was low on time, but Karjakin simply went for the repetition and did not played too ambitiously with the white pieces.

The Frenchman reached a winning position in the middlegame, where his opponent had to decide between giving up a pawn or allowing an attack on his king that looked devastating.

Svidler gave up a pawn, but in the postgame interview, after looking at the game with the engine, decided that allowing the attack was the better option. Vachier-Lagrave’s task was to slowly build up his position until his extra material was devastating for his opponent. Unfortunately for him, he allowed a tactical break and consequently a perpetual.

Welsey So vs Hikaru Nakamura ½

Up until move 10, the game was identical to Vachier-Lagrave-Svidler. Both Svidler and Nakamura played a rare idea but Nakamura fared better as he did not have any problems out of the opening.

White had more space and a little pressure which eventually allowed him to win a pawn. At that point, all the central and queenside pawns were exchanged and with little material on the board, So could not do much to win the game.

Black chose the Sicilian Defense which usually leads to complicated and attacking chess. Caruana chose the closed variation, committing to a kingside attack while allowing his opponent to enter through the queenside. It looked as though either his attack would be enough or he would find himself with extra material, but the position was extremely complicated.

Caruana chose the wrong path and while he still managed to win material, his opponent had enough counterplay with his active pieces. The game ended with a threefold repetition as neither player wanted to take unnecessary risks.

Three IM norms in Los Angeles
Metropolitan Chess, Inc. hosted an International Master norm round robin tournament from June 6th to June 10th, 2012. This tournament was the 19th in its ...