The hard-fought game between Magnus Carlsen and Maxime Vachier-Lagrave produced the sole leader of the tournament for the first time.

Far from the perfect, the game was a rollercoaster ride which started as advantageous for Carlsen but several mistakes later ended in Vachier-Lagrave’s favor.

Clearly a heartbreaking loss for the World Champion, who needs to be able to recover quickly and now allow this loss to dictate the direction of the rest of his tournament. On the other hand, the win is a big confidence boost for the Frenchman, who not only defeated one of his main rivals with the black pieces but will also have three whites in the remaining five games.

Fabiano Caruana is in clear second place with half a point behind the leader. 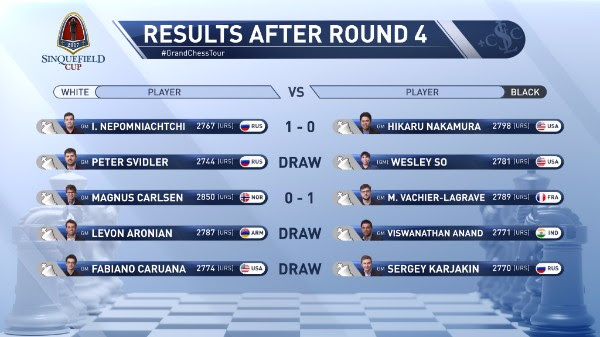 This epic six hour battle was the most thrilling and crucial game of the day. At first, it seemed as though Carlsen was playing to his highest standards and in a true Magnus style that the chess world is accustomed to.

In a completely locked position, the World Champion outsmarted his opponent and created an advantage out of nothing. At the key moment, instead of delivering the winning blow, Carlsen blundered.

The game still could have been salvaged but usually a mistake like that means that the player has lost the thread of the game. Instead of keeping the game balanced and trying to make a draw, Carlsen kept playing for complications.

All it took was one more mistake from the Norwegian for Vachier-Lagrave to take full control of the position and convert with near perfect play. With this heroic win, the Frenchman is now leading the tournament.

After losing the first two games, the Russian Grandmaster recovered nicely as his opponent completely collapsed. In an attempt to make his opponent uncomfortable, Nepomniachtchi opted for a quieter opening knowing that Nakamura, true to his style, would try to seek active counter play.

White had a slight edge when not sensing the danger, Black played carelessly, then instead of accepting a worse position, blundered the exchange. The material advantage was enough for an easy conversion when Nakamura blundered yet again and was forced to resign.

The Armenian superstar, known for his creative play, did not disappoint with his opening choice. He chose an obscure line that hasn’t been explored, pushing his pawn all the way to h6.

The former World Champion kept his cool and not only did he defend against his opponent’s advances but found himself in a pleasant position. He found a key idea on move 21, which forced his opponent to play with precision. Aronian reacted correctly and Anand decided to go for the repetition after not seeing a clear plan to increase his advantage.

The opening was yet another Giuoco Piano, which has become the latest fashion at the top levels. Caruana played a rare move order, leaving his king in the center and trying to gain advantage on the queen side.

Karjakin sacrificed a central pawn trying to build quick counterplay and take advantage of his active pieces. Caruana did not take any chances and the game did not last long, but it was still a difficult game, as White needed to do a lot of precise calculation not to find himself in trouble.

Peter Svilder vs Wesley So ½

For the first time in this tournament, the open Italian opening made its debut. As mentioned before, most top level players choose the closed Italian, trying to outmaneuver or outplay their opponents in the later part of the middlegame. Svidler chose this opening because he knew how well prepared So was and decided to test the waters.

They followed a game which was played earlier this year, until So chose a different continuation which oversimplified the game and equalized easily. Svidler took advantage of the only chance to pose problems for his opponent, but correct defense was not a challenge for a player of So’s caliber. The game ended in a threefold repetition.