Round 5 of the Sinquefield Cup was the final round before the day off and the players certainly gave their all. The most remarkable games were played by the current and former World Champions.

The rest of the games ended peacefully. There is a slight change in the standings as Magnus Carlsen is only half a point behind the leader, Maxime Vachier-Lagrave, while Fabiano Caruana is now a full point behind.

The second half of the tournament promises to bring a lot of excitement as the race is very close! 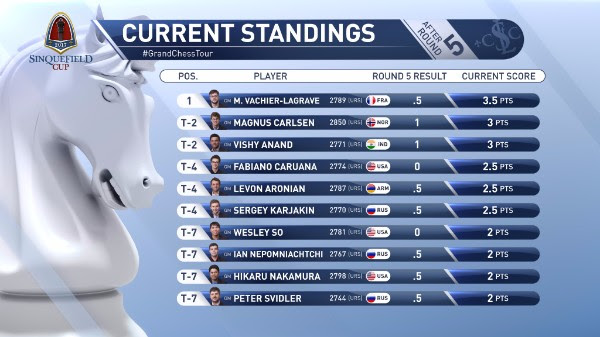 This was the most spectacular game of the round. Caruana opted for a line that he had never played before. His second, former World Champion Rustam Kasimdzhanov, explained the opening choice by saying that both players came to the game ready to fight.

Anand did not gain any advantage out of the opening but trouble came when Caruana miscalculated a long line. This was a costly mistake for the American, but mistakes like these allow for brilliancies.

Anand did not miss the opportunity by first sacrificing his bishop then playing a dazzling move that put his queen under attack, forcing his opponent to resign.

The World Champion was coming off of a very heartbreaking loss in the previous round where he gave away the point. He did not waste this opportunity on a recovery, as many Grandmasters do and proved once again why he’s the strongest player in the world.

So surprised his opponent in the opening by playing the Scotch Game. He obtained an advantage but started chasing ghosts by sacrificing a pawn instead of defending it and keeping his advantage.

The mistake was quite costly as White had a vulnerable king and opening up the position only created problems for White. Black’s pieces were able to penetrate and attack So’s weak pawns.

The US Champion resigned somewhat prematurely when he was down two pawns but it is doubtful Carlsen wouldn’t convert that position.

Karjakin surprised everyone by playing a retreating move with his bishop in the opening. As beginners, chess players learn not to move the same piece twice in the opening when unprovoked.

Karjakin explained that he did not want to go for theoretical complications and played a move that was suggested to him by a friend not remembering what the ideas of it.

This inaccuracy allowed Nepomniachtchi to obtain a winning advantage which he was unable to convert as he chose to go for a rook endgame instead of keeping more pieces on the board.

This is yet another case of the result of the game not reflecting accurately what exactly went on. This was an extremely complicated game which required a lot of calculation from both sides.

Aronian repeated a rare line that had occurred twice in round three of the event but Vachier-Lagrave was ready to face it with a novelty. In the middlegame, after many complications and forced variations, the game fizzled out into a rook against two minor pieces endgame.

Usually this imbalance favors the side with the two minor pieces, but Aronian’s active rook was enough to guarantee him the half a point.

The ever so common Spanish opening was played and the game was balanced throughout. Svidler found a pawn sacrifice idea which equalized the position immediately as it allowed him to have a lot of piece activity in the endgame.

After several more piece exchanges, there was not enough material left on the board for realistic winning chances. Nakamura played on for as long as he could with his extra pawn, but Svidler’s defense was not very complicated.