The day after the rest day produced only one decisive game but quite a lot of action! Levon Aronian took advantage of Wesley So’s poor form and won the game in style, which improved his position in the standings.

Magnus Carlsen, who is chasing the leader by half a point, gave his all to close the gap but had to settle for a draw against Hikaru Nakamura.

After holding a dangerous position against Fabiano Caruana, Maxime Vachier-Lagrave remains the sole leader with three rounds to go. As we reach the finish line, the pressure is on the rest of the field to start winning games to leapfrog Vachier-Lagrave. 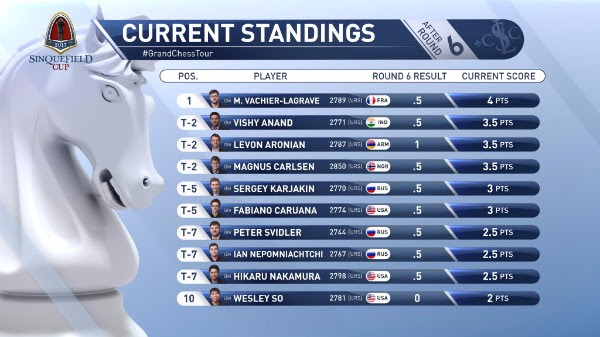 Levon Aronian vs Wesley So 1-0

This was the only decisive game of the round. The American Grandmaster hasn’t been able to find his form this whole tournament and today he collapsed completely.

White had a slight advantage when So first errored by first letting his opponent’s queen enter the action then losing his central pawn in exchange for a side pawn. He was unable to hold his position once Aronian’s rooks joined the action attacking his king and capturing his kingside pawns.

This marathon game lasted for over six hours and 94 moves but did not prove to be fruitful for the World Champion. Historically, Carlsen has been a problematic opponent for Nakamura, who finally managed to defeat him for the first time in a classical tournament last year.

In this game, Carlsen was pressing again but missed the key opportunity in a pawn up middle game. He played a move that prevented his king from penetrating the kingside, a decision he couldn’t quite explain as he knew the move was bad.

Nakamura defended tenaciously and took home the hard earned half a point.

Once again, Vachier-Lagrave chose his pet line, the Najdorf. Caruana did not shy away from the challenge and played a novelty early on in the opening.

The Frenchman was not expecting to face this line and chose a quieter continuation instead of the principled line where he would have to give up his queen.

Caruana had a big advantage but underestimated his position. Instead of playing more ambitiously and energetically, he exchanged into a pawn up endgame, where he realized he no longer could play for the win.

The all Russian match was quite uneventful. Nepomniatchi had one big opportunity to play for the advantage, which he missed. At that point, it was an opposite color middlegame on the board, which meant that more exchanges meant the game would end in a draw.

That is exactly what happened in the game and a draw was agreed after White managed to push his pawn all the way to b7 but had no way of making any more progress.

This game was also quite uneventful. Karjakin chose the London System, which is known for being a quiet opening that is used to avoid theory.

White did not obtain any advantage out of the opening as Black played actively and equalized without any problems. A draw was agreed when all the pieces except for the knights came off the board.