As we inch closer and closer to the grand finale, the competition for first place is getting close. As Maxime Vachier-Lagrave’s preparation failed to bring him home the full point, he was joined by Levon Aronian and Viswanathan Anand, both of whom won their games.

The three are leading the tournament with 4.5/7 and are being chased by Magnus Carlsen who is only half a point behind.

The tournament still remains wide open as several of the leaders will meet in the following two rounds. The players have once again proved that they came here to play and are not shying away from taking risks. The next two days promise to bring even more excitement 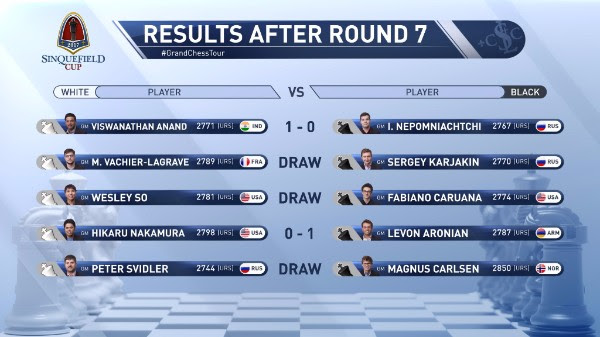 The former World Champion scored his second victory of the tournament after his opponent completely collapsed. The game was a theoretical Najdorf where Anand once again chose a line that he has championed.

His opponent was well prepared and the game was balanced throughout until Nepomniachtchi decided to give up a pawn for active counterplay in the rook endgame instead of playing defensively. Unfortunately for him, the counterplay did not offer enough and he soon found himself in a lost position with less material.

Levon Aronian chose a complicated and double edged line in the English Opening. His opening choice indicated that even with the Black pieces he was ready to fight and wanted that full point.

Aronian was able to handle the complications of the position better and always had the upper hand. In an already difficult position, matters became even worse for Nakamura after he missed a tactical shot which was spotted by his opponent immediately.

In a bishop against knight endgame, where Aronian had the bishop and the extra pawn, the four time U.S. champion was forced to resign. He now finds himself at the bottom of the standings along with Ian Nepomniachtchi and Wesley So.

This was definitely the wildest affair of the round! Karjakin played a novelty that Vachier-Lagrave was well aware of and prepared against. Karjakin later admitted that he reviewed the line an hour before the game but had a hard time remembering any of it.

The resulting position was such that gave Black many opportunities to make a mistake and lose the game in truly phenomenal fashion. The Russian Grandmaster was able to figure out the ins and outs of the position over the board and save the half a point.

Later in a tweet, Karjakin posted that he had everything until move 38 in his notes but had to spend all his time trying to remember it.

Welsey So vs Fabiano Caruana ½

The U.S. Champion has had a very tough tournament so far after losing two games back to back. In the postgame interview, he admitted that the losses are taking their toll on him and the past few days have been very difficult for him psychologically. He tried to remember the rest of the tournament and treated this game as the first round of a new event.

The game was quite solid and uneventful as neither side tried to press for a win. Of course, it is usually White’s choice to dictate the course of the game and Wesley So simply wanted to recover with a draw, which he achieved without any trouble. Caruana is quite a bit behind the leaders but felt that today was not the round to go all out.

It was the second time in this tournament that Magnus Carlsen faced the Scotch Opening, but this time with a different result. Once again, the World Champion had the upper hand but was unable to convert the extra pawn in the endgame. Unlike yesterday, the defense by his opponent was a lot more straight-forward and Carlsen did not try very hard to win, as he knew it wouldn’t be fruitful.

In the postgame interview, he was asked how he overcame yesterday’s disappointment. He felt very remorseful about overlooking the critical point in the game but still remains optimistic about his chances.