Round eight of the Sinquefield Cup did not bring any changes to the top of the leaderboard. Maxime Vachier-Lagrave, Viswanathan Anand and Levon Aronian all drew their games and remain ahead of the field by half a point.

Sergey Karjakin had the only decisive result of the round and has joined Magnus Carlsen in the chase, as the two are half a point behind the leaders.

One of the most shocking results of the tournament has been the struggle of last year’s winner, Wesley So, who has lost four games already and finds himself in last place. It will all come down to the final round as there are several possible scenarios for this tournament to end, including a four-way tie! 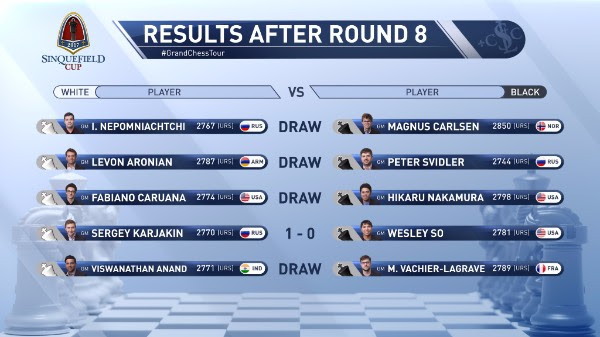 The former World Champion chose the English Opening, an unusual choice for him. He usually opts for 1.e4, which would have allowed his opponent to play his favorite Najdorf yet again.

Vachier-Lagrave was not expecting to face the English but actually ended up surprising Anand with his reply. White had a slight edge as he had the better development, but a rapid series of exchanges simplified the position into a drawn endgame.

Svidler repeated the same line Nepomniachtchi played against Aronian in round 1. Even though that game ended in a sparkling win for Aronian, he chose a different line knowing that his opponent would be well prepared.

The game became extremely complicated when the players decided to repeat the position instead of entering the wilderness of the variations. The computers disapproved of their decisions but the lines were too unnatural for humans to play over the board and a peaceful result was reached.

The World Champion needed to win this game to have a chance to catch the leaders. He found an interesting idea where his rook got adventurous roaming all over the board.

At one point, Carlsen needed to play more solid and make a draw but he knew he needed to win thus he chose a risky line. This decision put him in a worse position but Nepomniachtchi did not press enough and the game ended in a draw.

The opening that was played yesterday in the Ding Liren vs Anish Giri match was repeated today until Karjakin deviated on move 12. The game was balanced for a while until move 38 when So made a dubious move opening the c file, which only allowed his opponent’s rook to become active.

The resulting endgame was better for Karjakin, who converted masterfully without ever letting the advantage slip or giving his opponent any chances.

Nakamura chose one of his favorite openings, the King’s Indian Defense, which is one of the sharpest opening choices that requires a lot of theoretical knowledge. Caruana completely mishandled the opening and the middle game, finding himself in a worse position with the white pieces.

Nakamura had the bishop pair and the type of position where he could play for a long time trying to squeeze the win. Right before making time control, Nakamura blundered but Caruana returned the favor right away as he allowed a perpetual.