Top 10 standings after round 4

Seven players, including the tournament’s six highest-rated contenders, continue to hold on to the lead with immaculate slates after Friday’s fourth round in the 14th Dubai Juniors Chess Tournament – Sheikh Maktoum Bin Hamdan Al Maktoum Cup at the Dubai Chess and Culture Club.

Fide Master (FM) Viktor Matviishen of Ukraine, the top-seed with an international chess rating of 2390, disposed of Armenian eighth-seed Eduard Hakobyan in the fourth round to maintain his share of the lead along with Indian second-seed Rahul Srivatshav P, rated 2273, who overcame the UAE’s Candidate Master (CM) Omran Al Hosani.

Matviishen’s encounter with Hakobyan is the longest match in the tournament so far, as the young chess wizards battled for four hours before the Ukrainian, who had a massive 600-point rating advantage over the Armenian, scored his fourth full point. 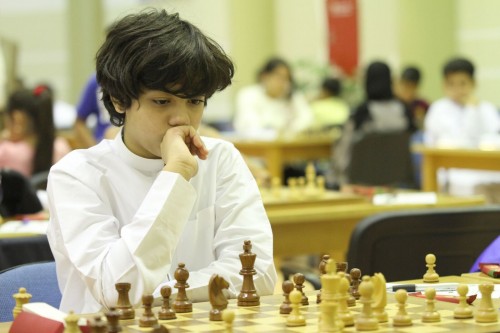 The round also a technical decision after Indian player Sidharth Hariharan was forfeited in his match against the UAE’s Sultan Amer when his wristwatch produced a sound. According to International Arbiter (IA) Mahdi Abdul Rahim, the tournament’s chief arbiter and an adviser to the Arbiter’s Commission of the International Chess Federation, players are prohibited from bringing into the playing hall any communication device or other electronic devices that produce a sound.

The tournament’s fifth and sixth rounds will resume Saturday at 10am and 6 pm respectively. A total of 110 players from 12 countries are taking part in the nine-round Swiss system tournament, which offers a total prize fund of US$10,000, with US$2,000 and the Sheikh Maktoum Bin Hamdan Al Maktoum Cup going to the champion. The top 10 winners of the tournament will receive cash prizes, along with the best Emirati and Dubai Chess Club players.

The tournament allocates a thinking time of 90 minutes plus a 30-second increment for each move. Games are also transmitted live at the club’s website and major international chess sites.