The team representing the Chess Federation of St. Petersburg has won his match today to take sole lead in the Russian Teams Championship. Malakhit was sharing the lead before this round, but only tied his match against Yugra today.

The SHSM “Nashe Nasledie” Moskow fell against  the team led by Peter Svidler. Precisely Svidler, who just had a good performance at the Candidates Tournament, got an important victory on the first board against Italian star Fabiano Caruana. The Russian used his pet Gruenfeld and won an astounding game against his young colleague.

The first seeded Malakhit could not take advantage of the rating advantage it had on almost all the boards. Alexei Shirov beat Aleksey Dreev, but this was not enough given that Sergei Rublevsky defeated Viktor Bologan in the next board. Final result: 3-3.

With one round to go, the SPb Chess Fed is in an enviable position to get the title. 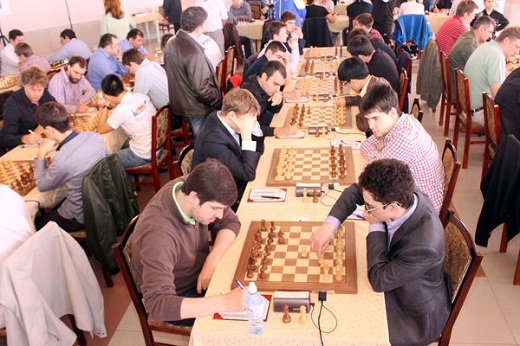 The key match of the day: SPb - SHSM