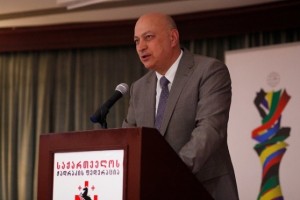 I need to comment on the latest negative events that occurred in FIDE.

First of all, I would like to refer to the results, which, unfortunately, were overridden by all the turmoil regarding the Kirsan Ilyumzhinov resignation.

As you know, FIDE had unpleasant financial results in 2015. Over the last year FIDE administration, especially it’s treasurer has worked extremely successfully to improve FIDE’s financial situation up to 900 000 US dollars in 2016.

This positive development gave FIDE the means to make an important decision – that the prize fund recent Women’s World Chess Championship will be paid from FIDE’s budget. Unfortunately, this became inevitable after Chess Federation of I. R. of Iran failed to transfer the required sum for the prize fund. However, the FIDE Presidential Board gave a final two-week notice to Iranian Chess Federation to pay the agreed amount to FIDE. If not the Iranian Chess Federation will be suspended and all the services will be frozen.

Now let me respond to the information, which was fast spread in the media.

I would like to draw your attention to the fact that despite the US Department of the Treasury sanctions against FIDE president in November 2015, I cannot recall even one occurrence of FIDE Presidential Board demanding the resignation of FIDE president. All this makes it harder and harder every day for FIDE to work efficiently and herewith puts potential and not only potential sponsors off. Instead, the Presidential Board gave to Kirsan Ilyumzhinov enough time to defend himself in front of US authorities.

It is obvious that abovementioned events resulted in FIDE management crisis, which, in my opinion, was the direct outcome of Kirsan Illyumzhinov’s hesitant position. This was notable during the Presidential Board Meeting when he couple of times mentioned his intention to resign. It was only at the end of Presidential Board Meeting when FIDE president, under strong emotional stress, verbally confirmed his resignation 3 times.

On my part, I would like to add that the Board has never shown disrespect towards FIDE president and all the fuss and rumors surrounding the subject are to be discussed during FIDE Presidential Board extraordinary meeting to resolve the matter. To clarify also that the misleading scenario appeared in the media claiming that US chess federation or Americans are behind all this. I assure you these are groundless claims.

To conclude, I believe the issue will be solved during the next upcoming Presidential Board meeting.